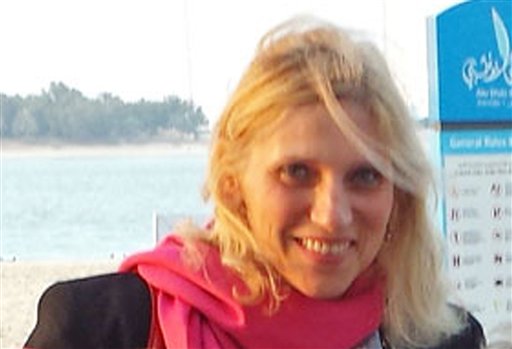 This undated photograph released by Footprints Recruiting on Thursday, Dec. 5, 2014 shows American schoolteacher Ibolya Ryan, center, who was killed in a stabbing attack in the restroom of the Boutik Mall on the upscale Reem Island in Abu Dhabi, United Arab Emirates. The UAE's interior minister said Thursday that police have arrested a female suspect in the stabbing death of the American schoolteacher in the country's capital and revealed that the attacker also planted a bomb outside the home of another American. (AP Photo/Footprints Recruiting)
Middle East

Ibolya Ryan has been identified as the American teacher murdered in the United Arab Emirates as her attacker is in custody.

Ryan, 47, was stabbed to death by an attacker wielding a butcher’s knife in the full black veil commonly worn by women throughout the region.

Violent crime and terrorist attacks are rare in the oil-rich country, which is home to a large foreign-born population that far outnumbers Emirati citizens.

“She was really a kind and enthusiastic person, and she was really enjoying her time over there,” managing director Ben Glickman said.

On a Footprints Recruiting webpage, Ryan describes herself as a Hungarian originally born and raised in neighboring Romania who trained as a teacher in the U.S. and Europe. She urged those considering teaching abroad to “be positive, open minded, flexible and take every challenge as a learning experience. “

Ryan worked at Palmer Elementary School in Denver from 1997 to 2003. She was licensed to teach in Colorado at the time of her death and was trained to help special education students.

In Abu Dhabi, she co-taught with an Emirati national, Ryan said. “It is special to work with my Arabic co-teacher: we plan, implement and create everything together. In this process we give ideas for each other and I like the fact that you learn a lot from each other and you can get ongoing feedback from your teacher partner,” she said.

Police earlier said that Ryan had 11-year-old twins and that they were being kept in protective custody until their father, who is the victim’s ex-husband, arrived in the country.

A picture of Ryan with her children reveals that they are both boys.

After carrying out the murder at the Boutik Mall on the capital’s upscale Reem Island, Ryan’s attacker left a makeshift bomb at the house of a 46-year-old Egyptian-American doctor in the prominent waterfront Corniche area, according to Emirati authorities.

One of the doctor’s sons discovered the device as he headed out for sunset prayers at a local mosque, and police were able to dismantle it before it could cause any damage, the interior minister said.

Police released a video that included CCTV footage showing the alleged attacker dragging a small suitcase that apparently contained the bomb into a building lobby. The police video also included footage of the woman’s arrest following a police raid at a villa.

The attacker, who the nation’s interior minister Saif bin Zayed Al Nahyan says the suspect targeted her victims based on their nationality alone in an attempt to create chaos and terrorize the country, is in custody.