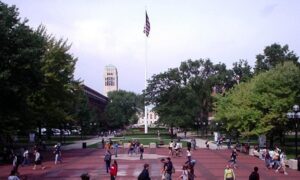 WASHINGTON—A lawyer for IBM employees who invested in company stock told the Supreme Court Nov. 6 that the employees should be able to sue managers of the company’s retirement fund in stock-drop litigation for not disclosing that the company’s microelectronics business was overvalued.

The issue in the case cited as Retirement Plans Committee of IBM v. Jander is whether the fund managers can be held liable under the Employee Retirement Income Security Act (ERISA) for not promptly disclosing problems in the microchip-making division that caused the price of company stock to fall 7 percent. IBM is short for International Business Machines Corp., of Armonk, New York.

The Trump administration, represented by Jonathan Y. Ellis of the U.S. Solicitor General’s Office, argued in court that ERISA doesn’t generally compel corporate insiders to offer disclosures in excess of what securities laws mandate. Many companies across the nation offer their employees 401(k) programs that are governed by ERISA.

Investors say they deserve to be treated fairly by plan administrators, but some business advocates view the case as an opportunity to curb perceived lawsuit abuses.

The U.S. Chamber of Commerce filed a friend-of-the-court brief in April arguing that if the fund loses this legal battle, companies would be less inclined to offer retirement plans that invest money in company stock.

The dispute over IBM’s 401(k) plan is one of many proposed class-action lawsuits that relies on ERISA to contest decreases in the price of a company’s stock, according to Bloomberg Law. The lawsuits assert that “plan fiduciaries, including corporate insiders, have a duty under ERISA to protect workers’ retirement savings when corporate fraud or other wrongdoing causes stock prices to fall.”

The Supreme Court dealt with these issues in Fifth Third Bancorp v. Dudenhoeffer, a 2014 ruling that spelled out what plaintiffs have to include in their ERISA-based stock-drop lawsuits. In light of the decision, most courts have tossed stock-drop lawsuits against corporate defendants such as JPMorgan, Whole Foods, and Citigroup.

In the case at hand, retirement plan participants claimed in 2013 that the IBM division was losing money even though the company set its value at $2 billion. IBM offloaded the foundering division in 2014, leading to a large write-down and a $12.95 one-day drop in its stock price.

Participants claim IBM plan managers failed in their duty to protect investor-employees from the drop. Participants lost at the trial level, but their claim was revived by the 2nd Circuit Court of Appeals, which deviated in part from the principles laid down in Fifth Third Bancorp v. Dudenhoeffer.

Clement said employee stock ownership plan managers “do not have a fiduciary obligation to use information gained in a corporate capacity or to use the regular corporate channels of disclosure for the benefit of plan participants.”

“Do you think that it is workable, practical, to require an insider fiduciary to determine” if disclosing inside corporate information at a specific point in time “will do more harm than good?” he asked Ellis.

“It seems to me, in that situation, the fiduciary has to make a very complicated calculation. But maybe … it’s more doable than it seems to me.”

In remarks to Clement, Justice Neil Gorsuch suggested letting corporate insiders serve as fiduciaries under ERISA was a bad idea.

“It’s not an inevitability that insiders would serve as trustees,” he said. “And I guess I’m not clear exactly what employees gain from having insiders as trustees if, at the end of the day, they wind up being know-nothings, because they can’t do anything.”

Justice Elena Kagan told Ellis it sounds like the Trump administration wants the court “to scrap Dudenhoeffer” and “start all over again.”

Ellis disputed that, saying the administration’s position was “fully consistent” with Dudenhoeffer.

Samuel Bonderoff, the attorney for the plan’s participants, said “it’s useful to have insiders as fiduciaries … because they know the inside information and are, therefore, in a better position to act to protect plan participants.”

Clement expressed “emphatic” opposition to the idea “that we want these insiders to serve as fiduciaries … so they can be sort of canaries in the coal mine, they can take early action based on their unique access to inside information.”

“That is absolutely wrong,” he said. “All these funds are set up to make sure that doesn’t happen. Because if that did happen, these would all be latent security violations.”