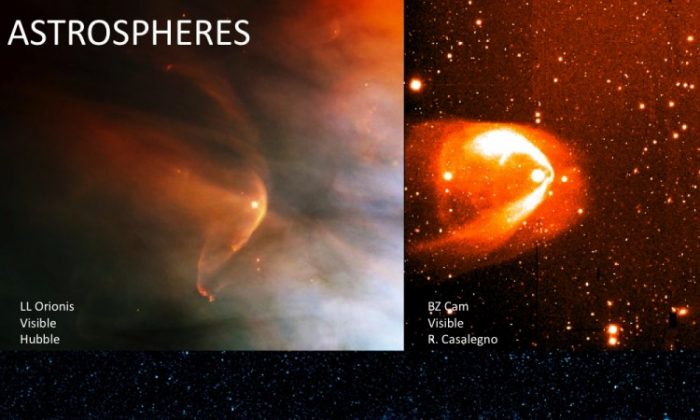 The heliosphere is the region of space dominated by the Sun that cocoons Earth and the other planets. Inflated by the million-mile-per-hour solar wind, the bubble-shaped heliosphere pushes its way through the galaxy. For a quarter century, researchers believed a bow “shock” formed ahead of the heliosphere as it moved through interstellar space — similar to the sonic boom made by a jet breaking the sound barrier. New data from NASA’s Interstellar Boundary Explorer (IBEX) shows that the heliosphere moves through space too slowly to form a bow shock. (Southwest Research Institute)
Science

Contrary to popular theory, the giant magnetic bubble around our sun probably does not create a shock wave as it travels through space, according to new observations from NASA’s Interstellar Boundary Explorer (IBEX).

Since the 1980s, calculations by physicists have suggested that the heliosphere—the massive cocoon of space surrounding our solar system—moves fast enough for a bow shock of ionized gas or plasma to form ahead of it, powered by a million-mile-per-hour solar wind.

“The sonic boom made by a jet breaking the sound barrier is an earthly example of a bow shock,” said IBEX scientist David McComas at the Southwest Research Institute (SwRI) in a press release.

“As the jet reaches supersonic speeds, the air ahead of it can’t get out of the way fast enough,” he explained. “Once the aircraft hits the speed of sound, the interaction changes instantaneously, resulting in a shock wave.”

However, the new data implies that the heliosphere probably creates only a bow “wave,” as IBEX shows it is moving about 7,000 miles per hour more slowly than realized, at around 52,000 miles per hour. Also, interstellar space has a stronger magnetic field, meaning higher velocities are needed for a bow shock.

“While bow shocks certainly exist ahead of many other stars, we’re finding that our sun’s interaction doesn’t reach the critical threshold to form a shock, so a wave is a more accurate depiction of what’s happening ahead of our heliosphere—much like the wave made by the bow of a boat as it glides through the water,” McComas said.

The researchers came up with two different models that match the findings, based on analytical calculations and simulations.

“It’s too early to say exactly what this new data means for our heliosphere,” McComas said. “Decades of research have explored scenarios that included a bow shock.”

“That research now has to be redone using the latest data,” he concluded. “Already, we know there are likely implications for how galactic cosmic rays propagate around and enter the solar system, which is relevant for human space travel.”

Launched in 2008, IBEX is exploring the edge of our solar system and has made other significant contributions to astronomy, such as the discovery of neutral atoms being emitted by the moon.

The study will be published in Science on May 11.

Animation of the interstellar interaction with our Sun – one of billions of stars that orbits around the galaxy. As we zoom in through the galaxy we can see our heliosphere; then if we travel along with the interstellar material, we can see how only a very rare few are directed along precisely the right path to make the 30 year, 15 billion mile journey and enter IBEX’s low energy sensor and be detected. Credit: NASA/Goddard Conceptual Image Lab