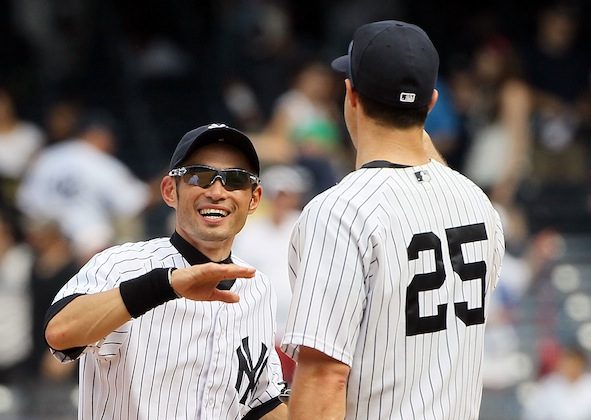 Ichiro Suzuki (L) and Mark Teixeira each had a hit in the Yankees' win. (Jim McIsaac/Getty Images)
Baseball

Raul Ibanez homered and hit a key two-run single as the Yankees (63-44) downed the Mariners (51-59) 6–2 Sunday afternoon in the finale of the three-game set at Yankee Stadium.

Ibanez’s solo shot in the fifth put the Yankees up 4–2, while his single in the seventh, which drove in Curtis Granderson and catcher Chris Stewart, gave them a four-run lead.

“He’s had a knack for it in his career,” said Girardi of Ibanez’s timely hit. “Raul is one of those guys that never tries to do too much and can relax in those situations and that’s why he comes through a lot.”

Ibanez was one of three Yankees, along with Cano and Jeter, with two hits on the day. Mark Teixeira reached base four times, including three walks.

Freddy Garcia (5-5) went five innings surrendering two runs on five hits and four walks. The win is the 150th career victory for the 36-year-old from Venezuela.

“It just shows you how consistent he’s been,” said Girardi of the milestone win, who noted that Garcia’s career has even been slowed by arm injuries. “Freddy’s been a real good pitcher for a long time.”

After Garcia’s exit the Yankees shut down Seattle using three pitchers, Logan, Robertson, and Soriano, to close out the final four innings without even allowing a hit.