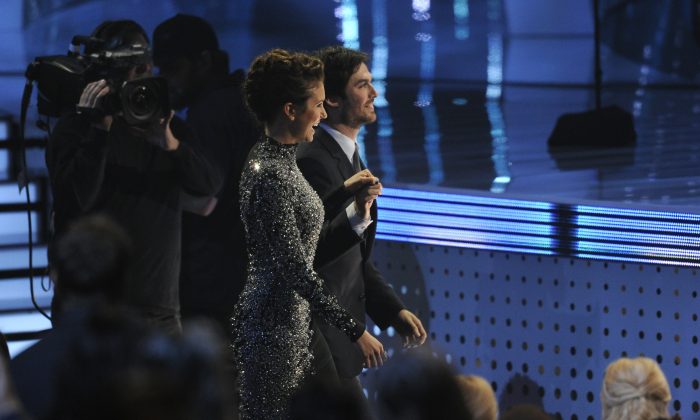 Nina Dobrev, left, and Ian Somerhalder, winners of the award for favorite on-screen chemistry for The Vampire Diaries, walk on stage at the 40th annual People's Choice Awards at the Nokia Theatre L.A. Live on Wednesday, Jan. 8, 2014, in Los Angeles. (Photo by Chris Pizzello/Invision/AP)
Entertainment

The Vampire Diaries stars won the Ship of the Year award, and appeared at the awards to accept it. Somerhalder even kissed Dobrev on the cheek.

“We want to thank you guys for all of your love and support of Delena,” Dobrev told fans.

“Our ship has been through some ups and downs and we are not sure where we would be without your support,” Somerhalder said during the speech. “So thank you, and we will try to keep it interesting for you.”

Dobrev jokingly “made out” with the award, telling Somerhalder that he should be “jealous,” reported Hollywood Life.

The latest actions come after Somerhalder, 35, tweeted to Nikki Reed, his rumored girlfriend, after she asked fans to help get a dog adopted.

“Some one please give Kate a GREAT HOME!!!! PLEASE!” he said.

Dobrev meanwhile posted a picture of a poem after the first pictures of Somerhalder and Reed were published: I give / You take, / I break / You fake / PITY, / I bleed / You dive in deep / Into my blood / As thick as syrup. / Tell me are you / A mosquito?” it read.

She later posted quotes about beauty and life.

Dobrev recently told Nylon that she’s in a good place, though. “I don’t like any kind of negativity,” she told the magazine. “I try to be good to everyone, whether it’s a love, a friend, an ex. I’ll always try to treat people the way I want to be treated.”