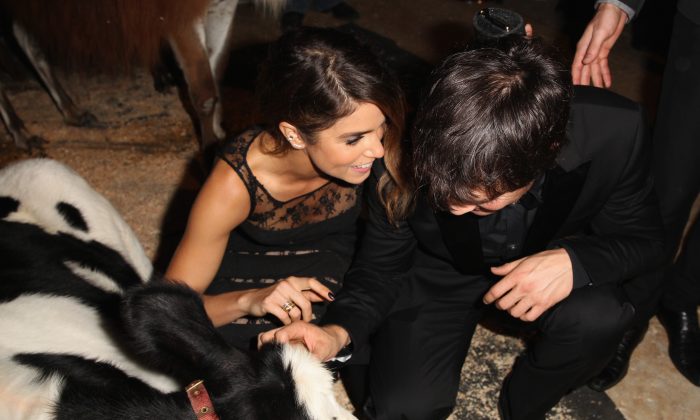 Ian Somerhalder is “very serious” about Nikki Reed, a source has revealed.

Somerhalder is best known for being the off-screen and on-screen boyfriend of Nina Dobrev, but they split earlier this year.

Somerhalder and Reed have appeared increasingly serious in public.

A source told Us Magazine that the pair moved in together in Atlanta, George where Somerhalder is filming season 6.

Reed goes to the set every day, the source said, perhaps an awkward situation with Dobrev.

A source told People magazine that the couple is “very serious.”

And they’ve gradually been more open about the relationship over social media, and attended events together.

They were recently at Heifer International’s gala in Beverly Hills, where Somerhalder was honored.

They sat at a table together, and Reed leaned in to whisper something to Somerhalder right before he accepted his award.

She planted a kiss on his cheek.

The couple was first spotted together at a farmers’ market in Studio City in July.

“They were a bit affectionate and looked cute together,” a source said at the time. “Nikki looked giddy but also a bit shy about Ian’s affection. You could tell that it’s all very new and that they haven’t dated for long.”

After Vampire Diaries wraps the pair plan on sharing a place in Los Angeles.