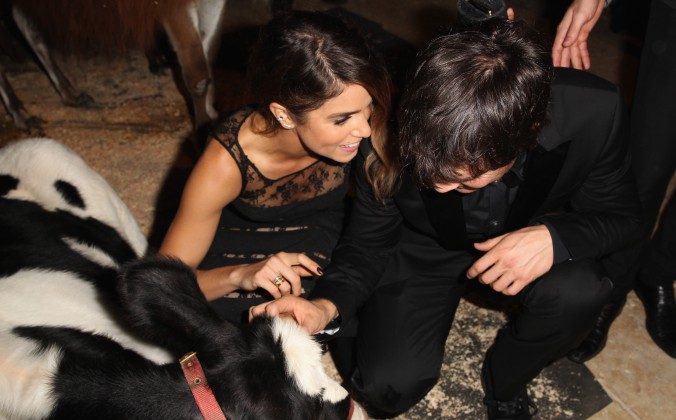 Ian Somerhalder and Nikki Reed are one of the hottest new couples, of particular interest to the legions of Vampire Diaries fans.

But though the couple appears happy, they may be moving too fast.

OKMagazine reports that she has also changed her work schedule to accommodate his and has adopted his pet cause, animal rights.

“Nikki’s crazy impulsive,” a friend told the magazine. “Once she falls in love, she can’t think straight.”

Reed may have moved too fast with her ex-husband Paul McDonald. They were married after seven months of dating.

Somerhalder has said publicly that he is happy with the relationship while Reed hasn’t really voiced her thoughts. “I couldn’t be happier if I tried,” he said recently.

A source previously told People magazine that the couple is “very serious.”

And they’ve gradually been more open about the relationship over social media, and attended events together.

They were recently at Heifer International’s gala in Beverly Hills, where Somerhalder was honored.

They sat at a table together, and Reed leaned in to whisper something to Somerhalder right before he accepted his award. She planted a kiss on his cheek.

The couple was first spotted together at a farmers’ market in Studio City in July.

“They were a bit affectionate and looked cute together,” a source said at the time. “Nikki looked giddy but also a bit shy about Ian’s affection. You could tell that it’s all very new and that they haven’t dated for long.”