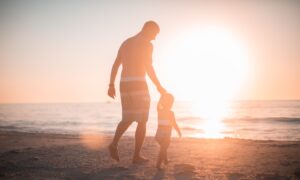 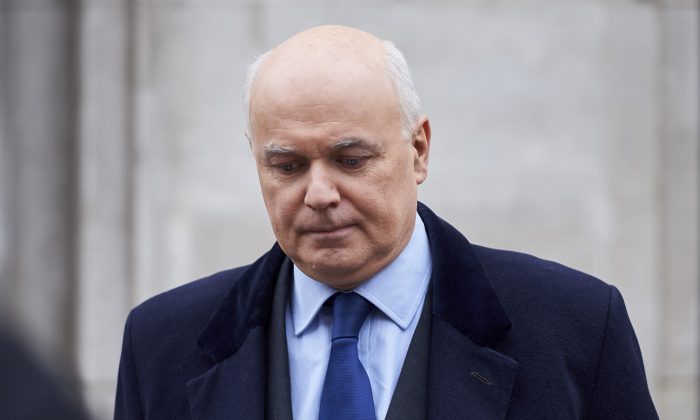 Britain's former welfare minister Iain Duncan Smith leaves the BBC television center in London after appearing on "The Andrew Marr Show" on March 20, 2016. In his first interview since resigning Friday, March 18, Iain Duncan Smith accused Cameron of trying to reduce Britain's budget deficit through benefit cuts which were unfairly hurting poorer voters while protecting older, richer ones. Duncan Smith, who last month became one of the most prominent Conservatives to say he would campaign against Cameron for Britain to leave the EU on June 23, denied his shock resignation was about Europe. (Niklas Halle'n/AFP/Getty Images)
Opinion

If there were a Richter Scale of Political Resignations, then prime ministers such as Margaret Thatcher, Harold Wilson, and Harold Macmillan would register at the very top—on nine.

Big beasts such as Conservative Chancellor Geoffrey Howe and Defense Secretary Michael Heseltine would register at about seven. Iain Duncan Smith’s departure, on the other hand, would probably score around six.

The work and pensions secretary’s departure is the sort of earthquake that would only inflict slight to moderate damage on solid structures but is capable of causing more severe problems for less stable edifices. Unfortunately for the Conservative Party, at least in the run up to the EU referendum, it fits all-too-easily into the latter category.

Duncan Smith can hardly claim to be in the same league as Geoffrey Howe—a genuinely quiet man who altered the economic and social destiny of his country. His resignation has clearly resonated, crystallizing the antipathy many Tories feel toward a chancellor they see as too clever by half and a prime minister they regard as far too desperate to keep the U.K. in the EU. But Howe’s resignation really detonated, blowing a decade of British politics to kingdom come by triggering the defenestration of an icon and the eventual defeat of the Conservatives by New Labour a few years later.

Still, while Duncan Smith’s departure doesn’t represent a direct threat to a sitting prime minister, like Howe’s did, it is nonetheless a direct hit on the prime minister’s entire political project. It strikes at the heart of Cameron’s attempt to persuade the country that it can trust the Conservatives to combine competence with compassion and that it should vote to stay in the EU.

The critique that came through in Duncan Smith’s resignation letter rams home the Out campaign’s portrayal of David Cameron and George Osborne as disingenuous out-of-touch toffs who don’t give a monkey’s for ordinary people. And that is one of the few narratives, along with the idea that Britain will be overrun by foreigners unless it gets out of the EU, that stands a chance of overwhelming the In campaign’s message that Brexit is a leap in the dark that will endanger Britain’s prosperity and security.

Blogs, newspaper columns and the airwaves have been running hot with analyses of Duncan Smith’s “real reasons” for going. But motives in these cases are always myriad and mixed. They are one part long-felt frustration (in this case over Osborne’s game-playing and determination to achieve savings without hitting those voters the Tories need most), one part eye on the main chance (in this case kicking one of the guys who is key to battling Brexit while he’s down).

It is impossible at this stage to tell whether, by resigning, Duncan Smith has inflicted a flesh wound—superficially nasty but no risk to the Remain camp in the long term—or something a whole lot more serious.

Which kind of wound it turns out to be will depend partly on the Conservative Party itself but also on the public, too. And when it comes to the latter, political junkies would always do well to remind themselves that most people aren’t paying anywhere near as much attention to all this as they are. By the time the referendum rolls round, pollsters will be lucky to find a majority of ordinary voters who not only know some Tory guy resigned back in March but that his name was Iain Duncan Something.

This weekend, then, has been a bad one for Cameron, and especially for Osborne, but earthquakes, even moderately severe ones, are very often survivable.

Tim Bale is a professor of politics at Queen Mary University of London in the U.K. This article was originally published on The Conversation.