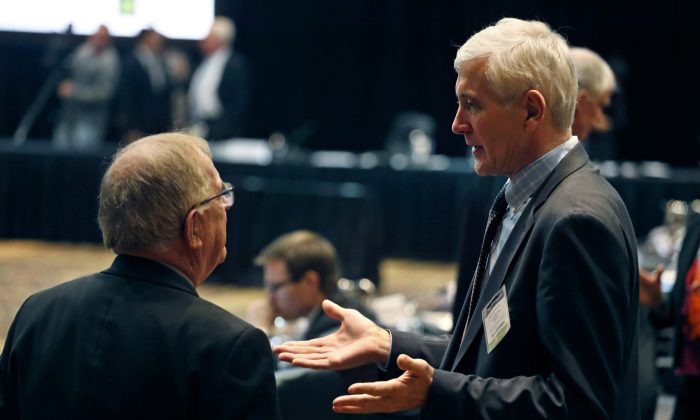 Norwegian anti-doping expert Rune Andersen (R) speaks with Warwick Gendall of New Zealand before a meeting of the World Anti-Doping Agency (WADA) at the Broadmoor Hotel in Colorado Springs on Nov. 18, 2015. Rune Andersen the head of the IAAF taskforce set up to determine whether Russia's ban from global track and field should be lifted says the country is making efforts to reform after its doping scandal. (AP Photo/Brennan Linsley)
International

PARIS—Six years before the International Association of Athletics Federations (IAAF) banned Russia, track and field’s governing body knew of doping so out of control it feared Russian athletes could die from abuse of blood-boosting drugs and transfusions, and officials considered collaborating with Russians to hide the full extent of the cheating before the 2012 London Olympics, according to internal documents obtained by The Associated Press.

When the massive scandal of state-sponsored doping and cover-ups in Russia finally erupted with full force in 2015, IAAF leaders acted as though blindsided. “This has been a shameful wake-up call,” Sebastian Coe, the British Olympian and newly elected president of the International Association of Athletics Federations, said.

But in 2009, as a sophisticated new blood-testing program was launched, IAAF tests were already providing shocking insight into the scale and gravity of Russian doping, according to a six-year span of emails, letters and reports the AP received from a person intimately involved in the workings of the IAAF’s anti-doping program. The person requested anonymity because he wasn’t given permission to release the documents.

At that stage, the test results weren’t enough on their own to sanction athletes, but they provided an early warning of the crisis and raise questions about why the organization entrusted with the safekeeping of one of the world’s major sports waited six years before suspending Russia, which could see its athletes miss the Rio de Janeiro Olympics in August.

“This matter of the Russian athletes’ blood levels is now so serious and is not getting any better (in fact possibly getting worse) that immediate and drastic action is needed,” Pierre Weiss, then the IAAF general secretary, wrote in an Oct. 14, 2009, hand-delivered letter to Valentin Balakhnichev, the Russian athletics president banned last week for life from the sport.

“Not only are these athletes cheating their fellow competitors but at these levels are putting their health and even their own lives in very serious danger,” Weiss wrote, telling Balakhnichev that blood results from Russian athletes “recorded some of the highest values ever seen since the IAAF started testing.”

EPO was also one of Lance Armstrong’s drugs of choice. The injectable hormone and blood transfusions, both banned in sports, are used by cheats to boost their levels of oxygen-carrying red blood cells, artificially improving performance. Over-abused, they can make blood go sludgy, with increased risk of clots, strokes and heart attacks.

The documents reveal how the IAAF wrestled with Russia—nudging and cajoling its leaders to act, but also using scientific advances in blood testing to try to catch offenders. They shed light on key junctures in the crisis, which has been muddied by allegations that IAAF and Russian officials took bribes from athletes to hide their doping so they could continue competing.

The IAAF confirmed to AP that the letters were genuine. Spokesman Chris Turner said they were a “clear, open warning” to Russia and insisted the IAAF has been “very strong” in dealing with the sports powerhouse.

By 2011, two years after its launch, the IAAF’s new “blood passport” testing regime was starting to flag so many suspected Russian dopers that officials explored the idea of breaking their own rules and those of the World Anti-Doping Agency by dealing with some cases privately, two notes show.

The notes proposed a two-track approach: strictly by-the-book sanctions for the best-known elite Russians likely to win medals at the London Games, but “rapid and discreet” handling of second-tier cases, working “in close collaboration” with the Russian athletics federation, for less well-known athletes whose sudden and unexplained disappearance from competition would likely pass unnoticed.

For those athletes who agreed to the deal, the IAAF would in turn “undertake not to publish the sanction,” which would be shortened to two years from four, according to a Dec. 5, 2011, brief.

The IAAF says the proposals were never put into practice. Balakhnichev told the AP they also never reached him.

“There were no secret bans. At least I didn’t know and didn’t hear about there being any,” Balakhnichev said in a telephone interview.

Turner said the December 2011 note was sent by the IAAF’s anti-doping director at the time, Gabriel Dolle, to Habib Cisse, who was Diack’s legal counsel. The follow-up note in 2012 was from Dolle to Diack, Turner said.

Turner said a colleague of Dolle’s in the anti-doping department objected at the time to the proposed non-disclosure of bans and was assured by Dolle that sanctions would be published, “which they were.”

“Every athlete was investigated and has either been sanctioned or is currently going through a legal process as part of being sanctioned,” Turner said. He said the IAAF has successfully brought 33 blood-passport cases against Russian athletes “and more are pending.”

“In 2011 there was a huge influx of suspicious profiles coming through,” Turner said in a statement to the AP. Blood passport cases take 8-18 months on average from investigation to sanction, he said, adding: “There was a need to prioritize, and in particular to expedite those cases which involved potential medal winners ahead of the 2012 Olympic Games. No cases were concealed or suppressed, the IAAF simply tackled them in order of importance.”

The IAAF’s ethics commission last week banned Dolle from the sport for five years for what it called an “inexcusable lack of due care and diligence” in the case of Liliya Shobukhova, a Russian marathoner who blew the whistle on blackmail, bribery and doping cover-ups involving Balakhnichev and others.

Six were subsequently banned for two years, mostly in 2012 and 2013, after the London Games. The odd one out of those six was Tatyana Andrianova, an 800-meter runner whose ban for a positive test for the steroid stanozolol dating back to 2005 was just announced in December. Still, in each of those six cases, the IAAF did publish the sanction.

Four others named in the 2011 note have not been banned.

One of those, middle-distance competitor Yevgenia Zolotova, was subsequently flagged as “suspicious” by a WADA-ordered probe, in its first wave of findings last November. It urged WADA to follow up with the IAAF. But the IAAF says it found nothing fishy about Zolotova’s case, and that external blood experts who must be consulted in such instances simply didn’t agree on whether the athlete’s abnormal readings proved doping.

Another of the four is Lydia Grigoryeva, the Boston marathon winner in 2007.

Turner said the IAAF has pursued a blood-passport case against her and her sanction “is about to be concluded and will be published accordingly.”

“Every suspicious ABP profile was investigated in full accordance with IAAF rules and the World Anti-Doping Code. All confirmed doping cases were publicly sanctioned. Nothing was covered-up,” he said.

The IAAF faces more questions this week, with the second round of findings due Thursday from the WADA probe led by International Olympic Committee veteran Dick Pound.

Pound told the AP that documents indicating that IAAF officials contemplated not disclosing doping bans were surprising and “not exactly in line with our rules.”

“It’s clear that there were deals,” he said in an AP telephone interview. “There didn’t seem to be any political will to take on Russia.”

IAAF officials may have been thinking expediently, he added, aiming to get cheats out of competition quickly and “protect clean athletes that way.”

Weiss, the IAAF general secretary from 2006-2011, said the governing body couldn’t have suspended Russia earlier than last year, after Pound’s commission concluded in November that President Vladimir Putin’s government was complicit in a “deeply rooted culture of cheating” in Russian sports that is “widespread and of long standing.”

“We always said we had problems with Russia,” Weiss said in an AP phone interview. “We didn’t have not any proof that the (athletics) federation was on the side of the doping.”

“WADA found out more than we could ever find ourselves,” he said. “Suspicion is not enough to suspend people.”

Still, the documents show the IAAF long worked behind the scenes with Russia before its Nov. 13 about-face, when IAAF Council members led by Coe voted 22-1 to suspend all Russian athletes. Russia needs to convince the IAAF it is changing to be reinstated. An IAAF team was in Moscow this week.

The documents provide no evidence of clear criminal activity. Diack is facing corruption and money laundering charges in France, accused of taking more than 1 million euros ($1.1 million) in a scheme to blackmail athletes and cover up their doping positives. French magistrates also are investigating Cisse and Dolle for suspected corruption.

Last week, the IAAF’s ethics commission issued a lifetime ban for Papa Massata Diack, one of Diack’s sons, for his role in the blackmail of Shobukhova. Also banned for life were Balakhnichev and Alexei Melnikov, former head coach of Russia’s race-walking and long-distance running programs.

The two briefs which Turner said Dolle sent to Diack and his legal counsel, Cisse, before the London Games centered on some two dozen Russian cases flagged by the blood passport program.

They proposed dividing the athletes into two groups: likely medal winners so well-known their sanctions had to be managed “in strict conformity with IAAF anti-doping rules” and others whose punishments could be kept quiet and for whom rules could be broken.

“It has been proposed to distinguish the elite athletes from other athletes, especially taking account of the arrival of the Olympic Games,” the April 2012 brief said.

Not only did the notes say lower-level athletes could get two-year bans instead of four years, but the 2012 brief also proposed that the IAAF “exceptionally” allow them to keep their competition results, even though this was “contrary to what is laid down in Rule 40.8.”

Weiss alerted Balakhnichev in a July 2009 email that blood screening “results show there is still a problem with many of your athletes, in particular in the race walking events.”

“We make you aware of the suspicious samples from Russian athletes, particularly the walkers, and ask you to investigate and propose solutions in this discipline, to ensure that the athletes will be under control and competing clean,” he wrote.

Of Russia’s 13 medals the following month at the world championships, three—all gold—were won by race walkers Valery Borchin, Olga Kaniskina and Sergei Kirdyapkin. Kaniskina and Kirdyapkin were subsequently banned for three years and two months in October 2012, while Borchin got an eight-year ban. The IAAF has appealed Russia’s handling of their cases as too lenient. They are now before the Court of Arbitration for Sport.

After the 2009 worlds in Berlin, Weiss wrote to Balakhnichev that Russian competitors’ blood readings “were extremely high, and again much more so than any other country competing.”

Unlike others sports, the IAAF did not have so-called “no-start” rules that could have kept athletes from competing with abnormal readings.

“However I can tell you that if it was in place … seven of your Russian athletes would not have been allowed to start in Berlin,” including two gold medalists, Weiss wrote, underlining the part about the medalists.

“In fact two of these athletes actually recorded some of the highest values ever seen since the IAAF started testing for blood,” he wrote. “These results are startling because not only are these athletes cheating their fellow competitors but at these levels are putting their health and even their own lives in very serious danger.”