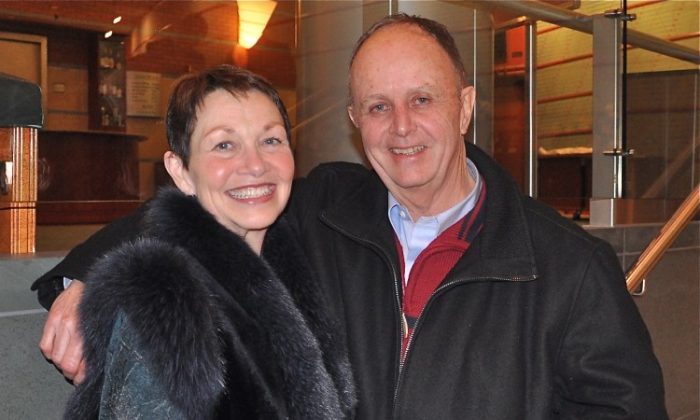 ‘I was totally impressed by the energy’

CINCINNATI, Ohio—Resounding applause and two curtain calls at the Aronoff Center for the Arts greeted Shen Yun Performing Arts return to Cincinnati. The first hint of spring warmed the evening of Feb. 3 as Mr. Jim Mills, a retired GE IT manager joined the audience in their enthusiastic response to the show. He shared his admiration, “They’re great performing artists. The dance is amazing. I was totally impressed by the energy of those young folks.”

Mr. Mills was accompanied by his wife, Mrs. Kathleen Mills who praised Shen Yun saying, “It was just absolutely beautiful to me. It was breathtaking, the interpretations that they did, the color, the movement, the silk, it was all so full of grace and beauty!”

As a silk artist, Mrs. Mills was moved by the performances, Sleeves of Silk and Khata for the Gods. She explained, “I’ve done a lot of work with silk. I do hand painted silk, so silk is very near and dear to me, and to see it being used like this is just, … very fulfilling to me.”

“The one where they were up in the Tibetan mountains to get closer to God, and the white silks was very interesting,” Mr. Mills said, referring to the performance, “Khata for the Gods“.

According to the Shen Yun program, “The khata, a traditional scarf, is presented to guests. Here the dancers offer it to the gods as a sign of reverence and devotion.”

As a Christian, Mr. Mills was moved by the spirituality he felt in the performances. “The songs [that] talked about the struggles of people on earth and looking to the Lord of lords.  … and King of kings, Lord of the gods,” he said.

Even though she is from a different cultural background, through watching Shen Yun Mrs. Mills felt a profound connection to traditional Chinese culture: “I think even [despite] the cultural difference, I believe we all have something very much in common, and there’s an overall universal sense of time and history that we’re in right now, and that came through very clearly—that we’re all anticipating something very spectacular happening in history coming soon, and I think we can identify with that.”

Touched by the performance, Mu Guiying Commands the Troops, Mrs. Mills said. “We do hand painted silks, and they’re usually for the purpose of dance, and one of the things that was really strong to me  . . .  when they did the [performance] about the woman who picked up the torch, so to speak, of her husband, the widow, who went to war—for me to see that we do some painting for faith purposes and for use and worship and to bring honor to God, and to see it being done here as well, our hearts are parallel.”

She said seeing Shen Yun inspires her to learn more about traditional Chinese culture. “I believe to see what we did tonight, and experiencing this taste of it, prompts us to want to learn more, and to be able to have a deeper understanding.”

Mr. Mills is already looking forward to enjoying Shen Yun next year. “It was very good. This was our first year coming here, so hopefully we can come back and see some more of the performances next year. I would like to do that.”