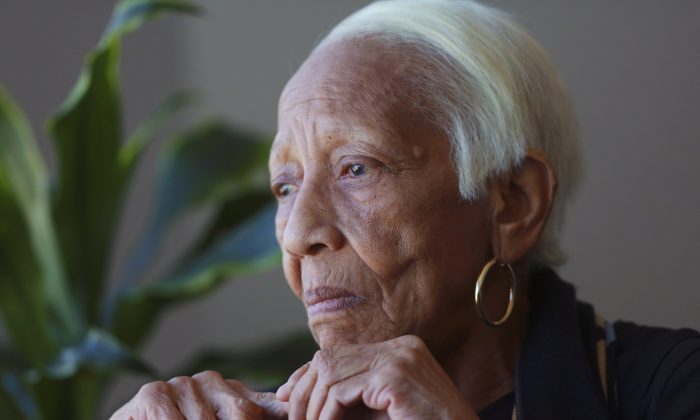 Jewel thief Doris Payne speaks during an interview in Atlanta on Jan. 11, 2016. The 85-year-old has managed to walk off with pricey jewels in countless thefts around the world for over six decades. (AP Photo/John Bazemore)
US

‘I was a thief’: Jewel-Pilfering Woman Reflects on Life

ATLANTA—Doris Payne exudes a seemingly effortless elegance, her white hair neatly smoothed back and gold hoops dangling from her ears. She speaks calmly and deliberately, inspiring the kind of trust that would ease any jewelry store employee eager to make a high-dollar sale.

And that’s exactly how authorities say the 85-year-old has managed to walk off with pricey jewels in countless thefts around the world over six decades.

Asked about her exploits, she speaks in broad terms laced with insinuation, refusing to give specifics of how she selects a target or what she says to them.

Asked about jewelry she’s said to have stolen, Payne interrupts the question.

Before she can answer a question about allegations that she sometimes walks out of a store with an expensive sparkler on her finger or wrist, her lawyer stops her, telling her not to answer.

Police would dispute her claim that she’s never concealed any jewels. She was arrested in October and accused of pocketing a $690 pair of earrings from a Christian Dior boutique in a Saks Fifth Avenue department store at a mall in Atlanta’s upscale Buckhead neighborhood.

Because of the pending charges, her lawyers won’t let her talk about that.

Payne was raised in West Virginia and moved with her family to Ohio when she was a teenager. After high school, she worked in a nursing home on and off for about four years. That’s the only “real job” she ever had.

Asked to describe what she’s been in her life, she’s quick to answer: “I was a thief. You know that,” she said with a chuckle.

Through the years, authorities have said she has used at least 22 aliases. And though she’s done some prison time repeatedly, she probably got away with her crimes more often than she got caught, authorities have said. The Jewelers’ Security Alliance, an industry trade group, sent out bulletins as early as the 1970s warning about her.

The Secret to All Great Art Forgeries

The roots of her craft run deep into her early teenage years.

A friendly store owner let her try on a few watches when she was 13 after she told him her mother had promised her a watch if she got good grades. But when a white man came into the store, the owner’s demeanor changed, as if he didn’t want to be seen being nice to a young black girl, she said.

She got to the door of the store before she realized she still had a watch on and the store owner had forgotten. She returned the watch, but that planted the seed in her mind that a simple distraction could make it easy to slip out with a fancy bauble in hand.

When she was in her 20s, she got the idea that she could support herself that way and confessed her plan to her mother, who was scared and told her it was stealing.

Despite her mother’s objections, Payne said that’s how she supported herself: “Every now and then I’d go and get me a real fine piece.”

Payne stayed close to her mother, who died in her arms some 20 years ago, she said.

As she tells it, Payne was a crafty kid who always tried to outthink the grown-ups. She was the youngest of six children and had a ploy for escaping punishment: She always kept a little New Testament nearby, convinced that would protect her from her mother’s switch.

“Sometimes, she’d make like she was going to reach for me and I’d scream, ‘I’ve got the Bible!'” Payne said.

She sneaked into “Gone With the Wind” when she was 7 or 8, and set about mimicking the way actress Vivien Leigh spoke. She devoured fashion magazines her mother bought and delighted in trying on her shoes and clothes. But she never liked wearing bows in her hair or other ornaments, and even now seldom wears jewelry.

For her interview with the AP, she wore a simple black dress, a colorful scarf draped around her shoulders and beige stockings with vertical stripes of black dots. The gold hoops were the only jewelry she wore.

The legend of Payne’s alleged thefts have long fascinated the public and media, with countless news stories and a documentary film detailing her feats. And while she said she doesn’t have an ego and doesn’t read all that’s written about her, she wouldn’t mind seeing a movie made about her life. Her pick to star: Kerry Washington from “Scandal.”

“If it should happen, I hope I’m around long enough to make sure it happens right,” she said. “I know what I’ve done. I’m not too ashamed of it.”