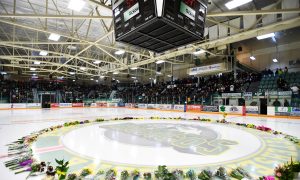 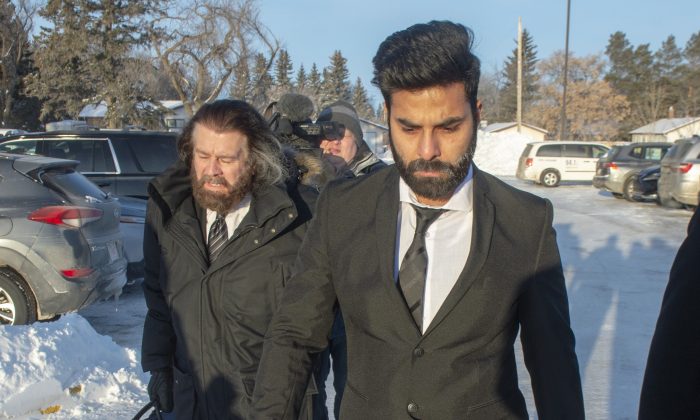 Jaskirat Singh Sidhu (R), the driver of the truck that struck the bus carrying the Humboldt Broncos hockey team, arrives with his lawyer Mark Brayford for the third day of his sentencing hearing in Melfort, Sask, on Jan. 30, 2019. (The Canadian Press/Ryan Remiorz)
Canada

‘I Want to Know Why:’ Broncos Families Want to Hear Why Trucker Didn’t Stop

MELFORT, Sask.—Several family members of those killed and injured in the Humboldt Broncos crash say they still have one big question: Why?

They want to know why a semi-truck driver barreled through a stop sign at a rural Saskatchewan intersection and into the path of the junior hockey team’s bus.

They also want to hear from the driver himself.

“All he had to do was stop,” says Scott Thomas of Saskatoon, whose 18-year-old son Evan died in the collision.

“I want to know why. That would be a huge part in me finding forgiveness to understand why.”

Jaskirat Singh Sidhu of Calgary has pleaded guilty to 29 counts of dangerous driving for causing the crash north of Tisdale last April. Sixteen people were killed and 13 injured.

An agreed statement of facts says Sidhu was not impaired or distracted and road and weather conditions were good at the time.

After the crash, it was also discovered that Sidhu had 70 violations of federal and provincial trucking regulations and inspection rules. Had he been stopped, he would have been suspended from driving for 72 hours.

“As of right now, I am of the opinion he was probably stressed,” Thomas told reporters outside Melfort court on Jan. 29.

“Clearly he wasn’t filling out his log books … Was his boss in his ear saying he’d better get his ass in gear because he’s behind?

“Why is a huge part of what I want to find out. Every one of us will want to know why.”

The last of 75 victim impact statements are to be submitted in court on Jan. 30 before lawyers begin sentencing arguments, likely on Jan. 31.

It’s expected Sidhu will also get a chance to address the court. He has yet to speak publicly about the crash although his lawyer has said he takes responsibility for what happened. Sidhu has also wiped away tears during the hearing.

Thomas said he wants to hear directly from Sidhu and even offered to sit down with him someday.

“It might be part of how he needs to go forward too.”

While many families have said in court that they forgive Sidhu, others like Andrea Joseph of St. Albert, Alta., feel the opposite. She called the trucker a “monster” for killing her 20-year-old son, Jaxon.

He broke the law and deserves a lengthy prison sentence, she added.

Former NHL player Chris Joseph was less angry than his wife. He told reporters after court on Jan. 29 that he thinks Sidhu took a chance on cutting through the intersection to save time.

“But we won’t know that until we hear from him,” said Joseph, adding he wants to hear Sidhu tell the court what his intentions were that day.

He also wants the trucking industry to a better job of making sure companies properly train their drivers and get those without proper skills off the road.