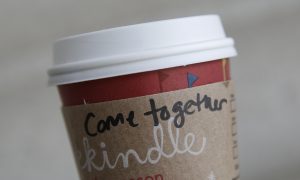 Starbucks 'Come Together:' Free Coffee for People Who Buy a Drink for Others
0
Share Now
TelegramFacebookTweetEmailTellMeWeReddit
Copy Link 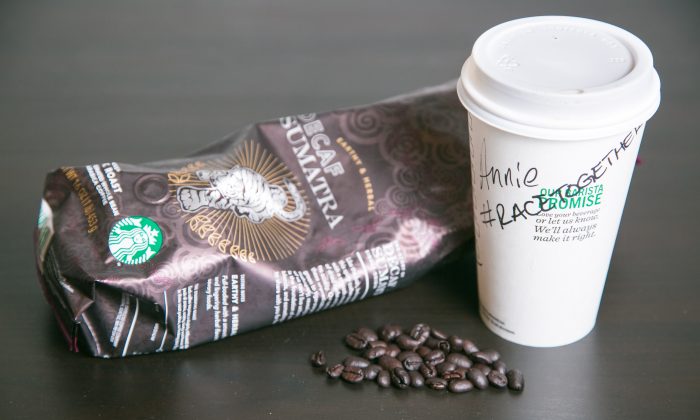 Starbucks is encouraging its baristas to start up conversations about race relations with its customers, by writing the hashtag, #RaceTogether on their coffee cups. (Benjamin Chasteen/Epoch Times)
US

This week, Starbucks Coffee launched a campaign to get its employees to talk about race relations in America with its customers.

If they so wish, baristas can write the hashtag, #RaceTogether on customers’ coffee cups when taking their orders, in the hopes of initiating a conversation about the critical, but touchy subject.

While many people who first heard about the campaign dismissed it, skeptical that a conversation with a Starbucks employee could do much to change the racism and bigotry that still exists in this country, I wondered: How would you begin to talk about race with a complete stranger? Would my fellow New Yorkers waiting on line chastise me for holding up their caffeine fix?

Would customers be prompted to talk about the death of Eric Garner, the black man who died after a police officer tried to arrest him for selling loose cigarettes and placed him in a chokehold?

I decided to find out for myself. At around 11:30, past the early morning rush hour, I walked into a Starbucks in Midtown Manhattan to order a grande latte. The barista (a white woman looking to be in her mid-20s) took my order in the usual fashion, without indication that she would prompt the conversation herself. So after she wrote down my name on the cup with her Sharpie, I jumped in: Was the store participating in the campaign? She said yes, she would gladly write the hashtag on my coffee cup. She then quickly turned to another employee (who was black) and directed my question to her, just to be sure. The second employee shook her head. I asked if this means I can get the extra scribbled words, but not actually engage in a conversation with them. The barista confirmed I understood correctly.

Undeterred, I marched on to another location a block away to try again. This time, I asked the barista (another young woman, this time black) about the campaign while she helped scoop up a cup of ice for me (it’ll keep me awake at work after the caffeine wears off). She said the campaign had just started, so she did not know much about it. I told her I had read that customers could engage in a conversation with the barista. How would that go down? She offered to ask her manager for more details.

Related Coverage
I’m Knitting a Sweater for a Penguin, Here’s Why

Several seconds later, she returned to inform me that the company wanted to “show empathy” for the racism that people face and would inform customers of that goal if they asked about the campaign. Again, she affirmed that there was no conversation to be had.

Just to make sure the first two weren’t anomalies, I walked a few blocks uptown to try one last time. Now hungry, I walked up to the counter to ask for an oatmeal raisin cookie. Alas, my experiment proved unsuccessful: The Starbucks employee (a young Asian woman) told me she had no idea about having a conversation, but again, took care to explain what the campaign involved—that she could write the hashtag on a cup.

At least in New York’s busy Midtown, a few employees understood the campaign as nothing more than a marketing gimmick.

At least in New York’s busy Midtown, a few employees understood the campaign as nothing more than a marketing gimmick. Maybe when Starbucks stores and USA Today (which the company has partnered with for the campaign) begin distributing leaflets with conversation starters like “How have your racial views evolved from those of your parents?” and “What is America’s greatest race challenge?” starting March 20, employees will have a better idea of how to handle customers’ inquiries. For now, talking about race seems too much to handle for a casual coffee run.

How Much Sugar Starbucks Actually Pours Into Your Drink

The company’s chairman and CEO Howard Schultz explained in a video that the idea came from discussion forums that the company held with its employees in December, after the deaths of several unarmed African-American men at the hands of police sparked protests and debate about race and policing across the country.

Employees and local law enforcement were invited to speak about their personal experiences, and gained new understanding from each other, Schultz said. Some staff expressed that they wanted to move the conversation beyond themselves.

Schultz liked the idea. “What can we do to create more empathy, more compassion, more understanding—not only within our own company, but how can we do it so that we elevate that sense of humanity inside our stores with our customers?” Schultz said in the video. He encouraged staff at all 12,000 store locations in the country to start the conversation, but said they could choose not to participate if they were uncomfortable with it.

The gesture is well-meaning and a sincere effort on the part of Schultz to tackle the realities of racial inequality and racism that too few Americans are willing to confront. But unless employees wish to initiate the conversation first, customers who want to talk are left hanging. And with a prickly subject like this, employees could also worry about saying the wrong thing, risking a blow to the company’s image, and ultimately, the person’s job.

The challenges the country faces when it comes to racial equality and combating racism are also complex, deeply connected to America’s history of slavery. Without staff guidance on how to facilitate a serious discussion, the initiative seems limited to idle chat that stops short of the initial goal to elicit mutual understanding.

Schultz is to be commended for trying. But if employees are really to be encouraged to do something about racial tensions in America, they would have to be told to do more than writing a few words on a cup.