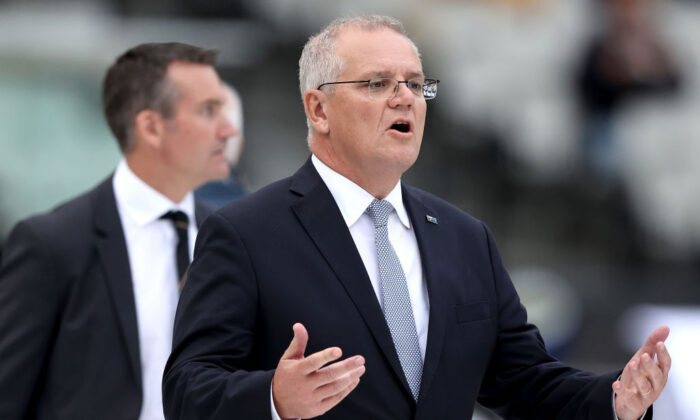 The controversy surrounding women’s rights and transgenderism in sports has entered Australia’s 2022 election after Prime Minister Scott Morrison endorsed a Liberals candidate who is a vocal advocate for biological sex.

On April 11, Morrison praised Katherine Deves, the contestant for the seat of Sydney’s Warringah, as an “outstanding individual” with “great legal background,” who is “standing up for things that she believes in.”

“She’s standing up for something really important and that is to ensure when it comes to girls playing sport and women playing sport, that they’re playing against people [who] have the same sex,” Morrison told 2GB.

“I share her views on those topics,” he noted, adding that the issues raised have “got nothing to do with the broad agenda.”

“The base is just about common sense and what’s right and I think Katherine’s right on the money.”

Deves co-founded the Save Women’s Sport Australasian advocate group, which calls for the prioritisation of fairness over gender inclusivity in sports. She has previously warned that trans inclusion policy would create a “loophole that can be exploited by opportunistic countries, sports teams and individual athletes.”

In the upcoming six weeks, Deves is set to take on Independent MP Zali Staggall, who on Monday criticised Morrison for leaving the door open to preventing transgender athletes from playing in the women’s category. Steggall described the PM’s move as discrimination against “some of our most vulnerable in our society.”

This is not the first time the Liberals leader addressed the issue. In February, Morrison backed the Save Women’s Sports Bill by Tasmanian Senator Claire Chandler, calling it “terrific.” The private bill would give women and girls the right to play single-sex sports by making it legal to ask a male competitor not to play in the female category.

“The political parties that wish to form government this coming election must commit to governing for all Australians, and to ensuring that every person in Australia can live their life, with dignity and respect, no matter who they are, or whom they love,” she said.

According to the LGBTIQ+ lobby group’s pre-selection survey of more than 5,500 LGBTIQ+ people, one in three Australians was undecided or considering changing their vote.

The issue continues to divide the New South Wales parliament, with NSW Education Minister Sarah Mitchell and the Perrottet Cabinet having rejected the protection of girls in high school sports from transgenderism.