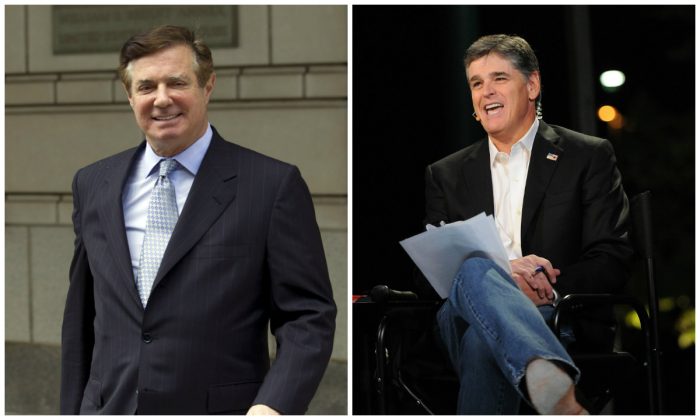 ‘I Officially Am Worried for the Country We Love’: Hannity, Manafort Text Exchange Released by Federal Judge

Recently revealed text messages between Fox News’ Sean Hannity and political consultant Paul Manafort show how the two men were outraged by the Russia investigation, media reporting, and were worried about “the future of the country we love.”

The 56-pages of messages (pdf) that were exchanged between Hannity and Manafort between 2017 and 2018 were unsealed on June 21 by District Judge Amy Berman Jackson in Washington—one of two venues where Manafort, a former manager for the Trump campaign, was sentenced for a series of crimes including money laundering, unregistered lobbying, and attempted witness tampering. None of the crimes were related to Manafort’s work with the Trump campaign.

Manafort, who pleaded guilty, was sentenced to 43 months in prison in March by the Washington court. This came after he received a 47-month sentence at a Virginia court a week prior. In total, Manafort will serve up to seven and a half years for the two convictions. He has also been indicted in a New York court on fraud charges.

Paul Manafort arrives at a hearing at District Court in Washington on Jan. 16, 2018. (Reuters/Yuri Gripas/File Photo)Both convictions stem from indictments by the office of special counsel Robert Mueller, who was appointed in mid-2017 to probe Russian interference in U.S. elections as well as allegations that the Trump campaign colluded with such interference. Mueller indicted dozens of Russians, Manafort, and several others.

In the text messages, Manafort expressed his concern over Mueller’s probe, telling Hannity that he thinks the special counsel was coming after him unfairly.

“Mueller is trying to intimidate me. The raid is just one example,” Manafort said in one message. “I won’t let him succeed but it is very lonely fighting this fight.”

Hannity responded, “Call me, text me, email me. Let’s eat, talk, and anything I can do to help. I’m very sorry.”

At one point Manafort said, “The media is trying to split me with DT (Donald Trump) and family by lies and untruths.”

“Yup,” Hannity said in response. “I see and know it all.”

In the back-and-forth, Hannity also brought his concerns over the future of the country.

“I’ll continue to talk about the fact that we do not have equal justice under the law. HRC. Emails. Obstruction. Destroying emails, bleach bit, devices no sim cards. Uranium one. Ukraine interference. Intel leaks. Unmasking. POTUS conversations leaked. … Look at Mueller’s team. All Clinton Obama Dem donors. No R’s. Judge now a Dem. I officially am worried for the country we love,” Hannity said. “This system is a disgrace.”

In another message, Hannity said, “From what I’m seeing today, there are so many obvious crimes that are NOT being investigated. Clear felonies committed. Conflicts of interest. A deep state LEAK A DAY and little to nothing being done. Conversations with the Potus and other Presidents and Prime Ministers leaked? Unmasking political opponents, leaking Intel? And now we have criminalized political differences. HRC NOTHING?”

He also told Manafort how he feels as though a “bullseye is at my head every single day.”

Manafort replied, “the establishment feels like they have to kill Trump… their existence depends on it… DT has to be destroyed… They will go after [Jared Kushner] and the family next.”

The two men also complained about the way former national security adviser Michael Flynn had been treated. Flynn was indicted by Mueller in 2017 for lying to FBI investigators about highly-classified conversations with Russian Ambassador Sergei Kislyak after they were criminally leaked to the media.

The Fox News’ host has released a statement following the release of the messages. Hannity said, “My view of the Special Counsel investigation and the treatment of Paul Manafort were made clear every day to anyone who listens to my radio show or watches my TV show.”

My view of the Special Counsel investigation and the treatment of Paul Manafort were made clear every day to anyone who listens to my radio show or watches my TV show.

Mueller’s over 400-page report, which was released in late April, details how the special counsel concluded that there was no collusion between the Trump campaign and Russia to influence the 2016 presidential election. The special counsel also left Americans confused by staying silent on whether he would charge President Donald Trump with an obstruction of justice crime, and says he had not exonerated Trump or proven him innocent in the report.