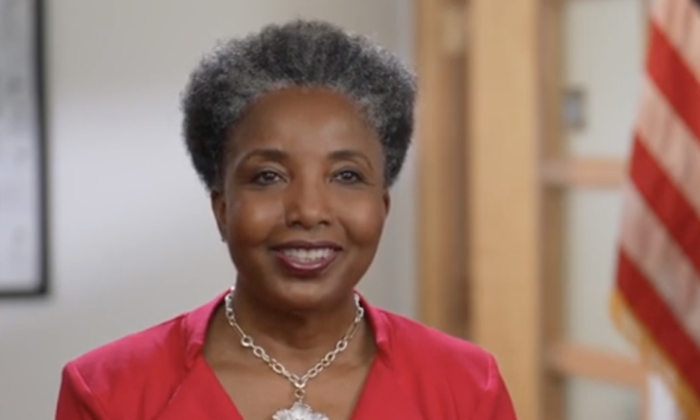 Retired Vanderbilt University professor Carol M. Swain in an interview on NTD's Capitol Report, on May 19, 2022. (NTD/Screenshot via The Epoch Times)
US News

‘I Feel Less Safe as a MAGA Republican’: Carol Swain on Biden’s Speech

A speech in which Biden called Republicans like Swain, who believe in America, enemies of the state and anti-democratic because she said, they ask questions, love the nation, and are concerned about what’s taking place.

“I do think conservatives are less safe after his speech than before,” Swain told The Epoch Times.

She also believes Biden was trying to divide Republicans into good and evil.

“What I believe in, would fall into the group that he has labeled as evil, threatening, un-American extremists,” said Swain, a conservative. “The way he was framing this speech, attacking and MAGA Republicans, he was also using that white supremacist label.”

And she wonders why he would label and attack MAGA, the people who want to Make America Great Again, a group of people committed to strengthening the nation.

“There’s no one that can look at America today from anywhere in the world, and not to say that we haven’t declined,” Swain said. “I felt that he was putting a target on our backs. And people who have been proud MAGA Republicans might begin to become fearful.”

But, she says, that that would be the wrong response. Just like when Hillary Clinton called Republicans deplorables, Swain says MAGA Americans should embrace the label.

“They’re trying to demonize something that’s good, we should embrace it,” Swain says she posted that sentiment on Twitter on Thursday night to encourage people and to remind them that MAGA Republicans care about the Constitution, the rule of law, their fellow Americans, and they care about Judeo Christian values and principles.

“But as an American citizen who falls into the group of people that he’s demonizing, [Biden’s comments] make the world less safe for me because the crazies are really on the side of the left.”

In a Tweet, Swain said that while people like her are labeled extremists and have no protection, Americans have witnessed political violence emanating from the Biden administration’s blind eye to Black Lives Matter and Antifa’s efforts to abolish law and order.

“Because we’re fighting for our children, he’s made us enemies of the state,” Swain said in a video she also provided to The Epoch Times. “I am an American, and I want to see America made great again. I think about the nation that gave me equal opportunity—that gave me an opportunity to achieve the American dream. I love America.”

I am a proud MAGA Republican. I believe in the Rule of Law, the U. S. Constitution, and our nation’s Judeo-Christian roots. #Biden #bidenspeech #MAGA #Republicans pic.twitter.com/gyCBB3kS7W

Swain grew up in poverty, dropped out of school after eighth grade, and faced numerous struggles. But with years of hard work and some encouragement, she earned a GED.

Today she holds five degrees including a Ph.D. from the University of North Carolina at Chapel Hill and an M.S.L. from Yale. Swain is an award-winning political scientist and former tenured professor at Princeton and Vanderbilt Universities, and an educational advisor for American Cornerstone Institute founded by Dr. Ben Carson.

She has written or edited 11 books, including “Black Eye for America: How Critical Race Theory is Burning Down the House,” co-authored with Christopher Schorr, and her latest book, “Countercultural Living: What Jesus Has to Say About Life, Marriage, Race, Gender, and Materialism.”

Her journey from GED to Ph.D. has a lot to do with why she loves America, where anyone has a chance to build a better life. But she sees it changing.

“I don’t like what has happened to our nation, under the Democrats, and as a MAGA Republican, I feel less safe, because I have been demonized because of my beliefs as an American, and that’s not something that we should tolerate. It’s unacceptable,” Swain said.

“[Biden] was unpresidential last night, and he had a very scary, demonic background. And it was clearly a misuse of the Marine Corps offices.”

“There are no coincidences,” Swain said. “Why did they choose a red, eerie backdrop? Sometimes,  it seems like America has already fallen, and there’s an illusion of America being a world power.”

Swain believes the true world power may already be China and that China dictates what the United States does.

“We should reject the destruction of our country,” Swain said. “The Democrats under Joe Biden could not be clearer about their purpose and their intent. And it’s not to make America stronger. It’s to weaken us in every way.

“We need to come together across political lines and reject what’s been done to our nation, our Constitution, and our way of life. If we don’t, we’re going to wake up one day, and it’s going to be soon, and it will all be gone,” she said.

“America’s prosperity and the things that distinguish us from other nations can be gone overnight.”