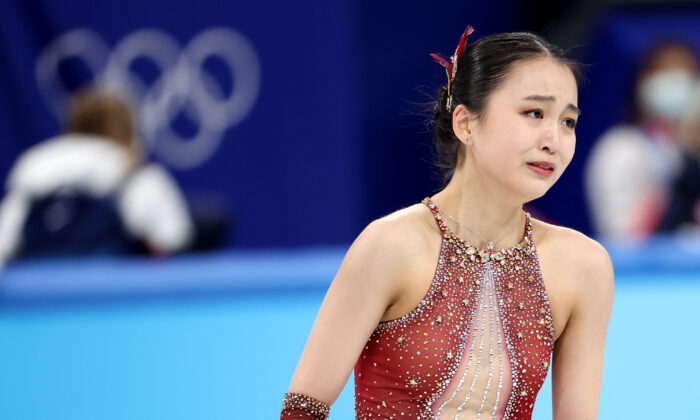 ‘I Couldn’t Hold It Back’: US-born Chinese Figure Skater Breaks Down After Another Fall at Beijing 2022

A tearful American-born Chinese figure skater triggered a fierce backlash on Chinese social media for slipping up during her performance two days in a row at the Beijing Winter Olympics.

19-year-old Zhu Yi burst into tears before she could finish her routine, after falling twice and finishing last during the team event’s women’s singles free skating on Feb. 7.

“I couldn’t hold it back, and the tears came flowing,” Zhu told Chinese state-run media. The young athlete persevered to the end but couldn’t help hiding her face in her hands.

This followed her last-place performance a day earlier that knocked China to fifth place from third in the Beijing Games’ team event. Zhu tumbled during a jump, crashed into the wall, and later bungled a triple loop, scoring 47.03, far behind the 90.18 score of the front runner.

Zhu said on Feb. 6 that she was eager to show the country what she was capable of, “But unfortunately I didn’t,” the athlete said in a quivering voice.

Not the routine Zhu Yi hoped for, but she has gained a priceless experience representing her nation at a home games 🇨🇳❤️#Beijing2022 | #7Olympics pic.twitter.com/CRNcVJ2C2K

“And what people said online actually affected me,” Zhu said after another disappointing routine on Monday.

Her multiple falls triggered immediate backlashes on China’s Twitter-like Weibo, as netizens blasted her performance, calling it “embarrassing,” and questioned her selection for the Olympic team.

“How dare you skate for China?” a web user commented, winning thousands of upvotes. “I’m the one who wants to cry,” another wrote. The hashtag #ZhuYiHasFallen recorded over 200 million views in hours on Weibo, before being taken down by Chinese censors.

Since the public continued to mock Zhu for crying over her continual flops this week, China heavily censored hashtags such as, #ZhuYiHasFallenAgain, after which supportive posts by state-backed accounts and calls for sympathy became more common.

Observers said the public in China is not showing enough Olympics spirit, such as fair respect, especially to naturalized athletes.

Born and raised in a Chinese immigrant family in California, Zhu changed her name to Zhu Yi and gave up her U.S. citizenship in 2018 to compete for China—paving the way for her Olympic debut of 2022 on Team China.

“I’m excited that I have an opportunity to go. … I skate for China and become another big name for China,” the then-16-year-old told China’s state broadcaster CCTV in an exclusive interview.

Yet such good faith failed to please Chinese netizens during the 2022 Games, some of whom now allege Zhu stole the place on the team and benefited from her family’s connections. Her father Zhu Songchun, an award-winning scientist specializing in artificial intelligence, returned to China in 2020 to teach at Tsinghua University and Peking University.

Some also expressed anger towards her lack of fluency in speaking Mandarin.

“If she [Zhu] won, the abuses would not exist,” China commentator Qin Peng said at a Feb. 7 program with NTD, an affiliate of The Epoch Times.

He blamed the lack of Olympic spirit on Beijing seeing the Olympics as a “gold medal project” and preaching that gold winners are the country’s pride.

Another guest speaker of the NTD program, Sean Lin, said Zhu is a victim of Communist propaganda. Multiple state-run media had hyped up nationalism, he said, by claiming the naturalized athlete should bring honor to the motherland and shape the image of China’s rise.

“For netizens, their psychological gap is too big,” said Lin.

Zhu will compete in the individuals skating event on Feb. 15.

China advanced to the finals along with Russia, the United States, Japan, and Canada.