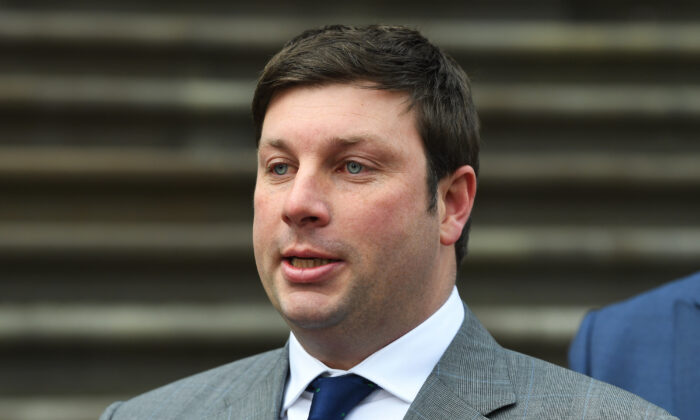 Victorian MP Tim Smith speaks to reporters on the steps of the State Parliament of Victoria in Melbourne, Wednesday, June 19, 2019. (James Ross/AAP)
Australia

The incident occurred on Oct. 30 evening in Hawthorn after Smith decided to drive home from dinner with friends believing he was under the legal limit. Smith recorded a blood alcohol reading of 0.131.

“I am bitterly disappointed that any member of parliament, let alone one of my colleagues, would get behind the wheel after drinking, let alone recording a BAC of what he did,” Guy said.

“As I said, I remain very angry with that kind of conduct, let alone a conduct from someone who is a colleague of mine and a friend.”

A Victoria Police spokeswoman said no one was injured in the crash, but the accident came within metres of crashing into a child’s bedroom. The 38-year-old has had his licence suspended for 12 months and will be fined.

The following day on Oct. 31, Smith announced his resignation from his position as Shadow Attorney-General and his role in the Shadow Cabinet, saying that he made a “serious error of judgement” the previous night.

“I apologise to my constituents, my colleagues, my family and the people of Victoria who expect their elected representatives to uphold the highest standards of behaviour,” Smith said in a statement.

Guy has not commented on what action the Victoria Liberal Party will take in response to Smith’s incident.

“I will speak to him face-to-face within the next 24 hours or so, to discuss his future with him and what comes from here,” he said.

“Until then, I am not going to speculate via the media on his future. I will talk to him face-to-face as you would expect me or any other boss to do.”

In 2018, Guy called for the resignation of Liberal MP Simon Ramsay after he was caught driving while almost four times over the limit. Two days later, Ramsay announced he would not recontest his upper house seat.

Federal Treasurer and federal member for Kooyong Josh Frydenberg said he would not “get into a public commentary” on Smith’s conduct but added that his resignation was “the appropriate thing to do.”

“Certainly, Tim is a good friend, and I have supported him, but I am also deeply disappointed in his conduct. His conduct was unacceptable, drink driving is dangerous, and events like these are not without consequence,” Frydenberg told Sky News’ AM Agenda.

Smith’s resignation has forced a shadow cabinet reshuffle—just seven weeks after he was promoted as shadow attorney-general.

Upper house MP Matt Bach will replace Smith as shadow attorney-general, while David Southwick will pick up the finance portfolio.

“These changes will ensure the recovery of lives and livelihoods remains front and centre, as Victoria rebuilds after 18 months in and out of harsh COVID lockdowns,” Guy said.

Smith has been critical of the Andrews government throughout the pandemic, accusing the premier of being a “dictator.”

Last week, Smith promised the coalition would scrap the proposed pandemic legislation—which, if passed into law, would give the premier unprecedented pandemic powers—if it won the next election.