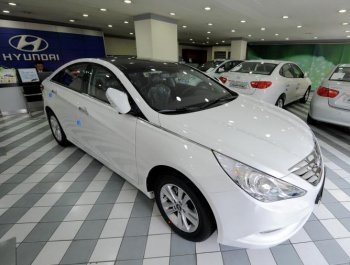 HYUNDAI RECALL: Hyundai Motor's sedan Sonata model is on display at its branch in Seoul on April 22. Sonata is part of a major Hyundai recall in the United States. (Jung Yeon-Je/Getty Images)
Business & Markets

Hyundai Sonata Models Recalled in US Over Steering Concerns

Caroline Dobson
View profile
Follow
biggersmaller
Print
Hyundai Sonata models were recalled in the US due to steering issues, which were identified by the US National Highway Traffic Safety Administration (NHTSA), according to a statement over the weekend.

Hyundai Motor Co., South Korea’s biggest automaker, is recalling 139,500 vehicles although no accidents have been reported. According to an e-mailed statement, the recall is a precautionary and a voluntary initiative.

The company is recalling Sonata models manufactured since December 2009. This particular model is the best-selling model in the U.S. market for Hyundai, for a total of 128,484 units delivered, accounting to around 35 percent of the company’s total 2010 sales.

“It’s a recall of Hyundai’s flagship model in the flagship market,” said Kang Sang Min, a Seoul-based analyst at Hanwha Securities Co., according to a Bloomberg report. “A voluntary recall with no case of accident usually gives an impression that the company cares about safety.”

Given the barrage of complaints Japan-based Toyota Motor Corp. received about its quality control issues and mass recall exercise on an international basis, with more than 9 million vehicles affected due to an acceleration pedal issue, Hyundai’s announcement does not seem as drastic.

"Hyundai's pre-emptive action is fast enough to avoid any criticism in handling safety issues," said Kim Byung-kuk, an analyst at Daishin Securities, according to Reuters.

The Seoul-based automaker is planning to commence its largest recall next month. To some degree, this could slow down sales and tarnish its reputation in America.

However Lee Sang-hyun, an analyst at Hana Daetoo Securities in Seoul, said the recall is unlikely to hit Hyundai's sales.

"However, since potential defects related to assembling are not a significant problem with its quality, it will barely impact Hyundai's sales," Lee said in an interview with Reuters.

A Sonata problem had already occurred in Korea as well as in the United States in February, when 47,000 vehicles were recalled in relation to a front door lock flaw.

Under the family of Hyundai Motors, Kia Motors Corp., South Korea’s second-largest automaker, is also experiencing its own recall, as well resulting in Jeong Sung Eun resigning as the vice chairman and taking accountability for the four models being impacted. The four models involved were the Soul, Sorento, and Borrego sport utility vehicles, and the Cadenza sedan. Around 104,000 cars were called in early September due to a wiring issue that could cause fires.

Hyundai and Kia combined are considered to be the world's fifth-largest auto group and have been attempting to compete with Japanese companies and improve quality.