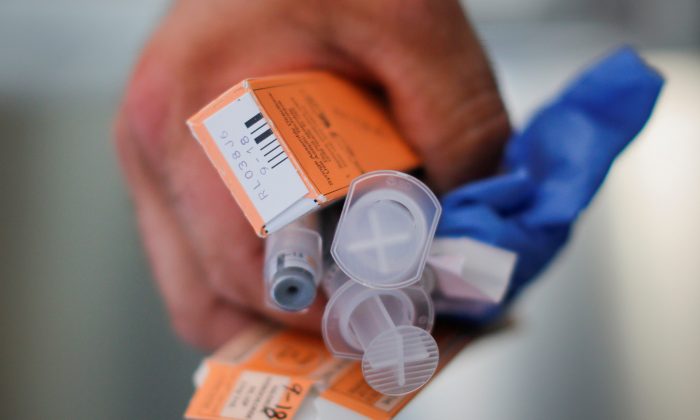 In this photo (not directly related to the story) a doctor holds used doses of a dangerous drug after medics revived a man who had overdosed. (Reuters/Brian Snyder)
Australia

Hyoscine: The Travel Sickness Drug Linked to a Mass Overdose of Backpackers in Perth

Authorities have identified one of the substances in a chemical cocktail linked to a mass overdose of backpackers in Perth, Australia.

According to the ChemCentre, hyoscine was the only identifiable drug detected in the samples of the white powder inhaled by the victims just before midnight on Tuesday, Jan. 2, at a property described as backpacker or student accommodation in the inner-city suburb of Victoria Park, ABC reported.

Emergency services rushed nine people to three separate hospitals in the city after finding them unconscious or violently ill after allegedly snorting the drug.

Hyoscine is typically used in much smaller quantities to treat nausea and can be found in over-the-counter travel sickness medications.

In other forms it can be used to treat irritable bowel syndrome and other gastro-intestinal pain.

But in larger quantities the drug—also known as scopolamine—has been used by criminals as a date rape drug and to incapacitate robbery victims.

The drug impacts the chemicals that transmit messages between the brain and nervous system.

Other unknown substances potentially present in the mixture taken by the backpackers may have intensified the effects.

“As [hyoscine has] been the main drug that’s been identified, I think it’s likely to be the active ingredient,” Professor Allsop said.

“Unfortunately, there are sometimes other substances that aren’t always as readily identifiable which may exacerbate the effects of the drug.”

One of the victims discharged from hospital told ABC that the group had found a package containing an unknown substance wrapped in aluminum foil and decided to snort it.

They soon found themselves semi-paralysed and intensely sick.

“Had it not been for the early triple-0 call and medical intervention on Tuesday night, the consequences could have been much worse than they were,” he told the news outlet.

Witnesses yesterday spoke of being terrified as they watched people have seizures while they were being carried on stretchers out of the house.

Medical staff say three of the drug takers remain in a critical situation and are in intensive care at hospital.

Royal Perth Hospital emergency medical physician David McCutcheon said some of the group had to be sedated when admitted to hospital.

“They were brought to us in a state of agitated delirium, they were hallucinating, their hearts were racing,” McCutcheon said.

“Several of them have had to be put in a medically-induced coma for their own protection,” he said.

“I really need to emphasize how seriously unwell they were.”

Nine people rushed to hospital after suspected drug overdose at Perth house. "It appears as though they didn't know where they were. They were rolling around in their stretchers." https://t.co/8q4WW3I3iO #Perth #7News pic.twitter.com/fO2SYmheR5

Clinical toxicologist Jessamine Soderstrom told ABC that some of the patients would be kept in induced comas for some days.

Soderstrom said it was “extremely lucky” that an ambulance was called when it was.

“If it wasn’t [for the] timely call of the resident… some of those patients inevitably would have died,” Soderstrom said.

“When your body overheats to a certain temperature for a certain period of time it’s like cooking an egg,” she said.

“Your proteins basically denature and you go into multi-organ failure and patients die from that.”

Ambulances were called to the residence just before midnight Tuesday were they found the nine in a semi-conscious state.

‘It Was Really Scary’

Residents in the neighborhood described chaotic scenes as those affected by the drugs were taken away in the ambulances.

“When we came out (we saw) heaps and heaps of police cars and ambulances, eight ambulances and six or seven police cars,” neighbor Sebastian Arevelo told 9NEWS.

“It was just absolutely crazy. People were rushing around, rushing into the house,” said Arevelo.

“People started coming out on stretchers, most of them were in an unconscious state,” he said.

“One of them was kicking and almost having a spasm. It was really scary.”

Local resident Sophie Barnet told the ABC that the whole episode was frightening to witness.

“They [the stretchers] were all coming past in a line it was so scary and they had glassed eyes and they were like in a different world it was so scary to look at … a lot of them were having seizures,” Barnet said.

“A lot of them were shaking and trying to get out of the bed, but I don’t think they knew they were doing it,” she said.

“And there was one guy that was really violent on the stretcher, he was like punching the air and everything.”

Some of the nine patients involved in a mass overdose of an unknown drug in Perth 'inevitably would have died' without medical help, doctors say https://t.co/64CIAOyQqo #perthnews #wanews pic.twitter.com/dRHJcW5btJ

Another neighbor told 9NEWS that the residence was being used as short-term accommodation for backpackers or students. “They seemed a pretty happy-go-lucky lot,” resident Gary Baden-Davidson said.

“It’s like a backpackers, it’s pretty transient. People come and go every two weeks or so,” he said.

“We’ve never had any trouble with them before.”

Three of the nine, those least affected by the overdose, have been discharged from Fiona Stanley Hospital.