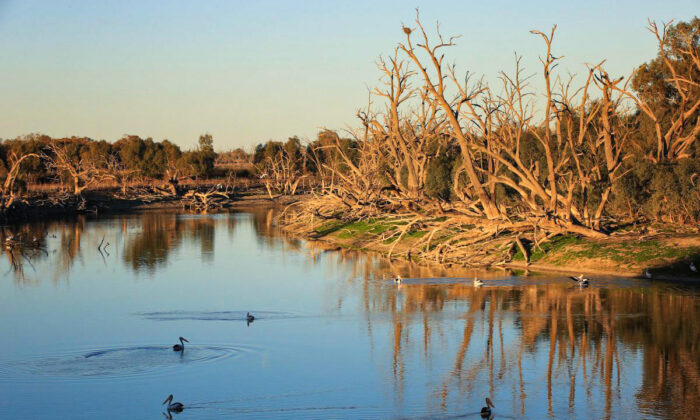 A small patch of water at Lake Wetherell in the Darling River area in Menindee, Australia on Aug.14, 2019. (Mark Evans/Getty Images)
Australia

Research led by the University of South Australia (UniSA) has found that the “indestructible” per-and poly-fluoroalkyl substances (PFAS) may actually be removed from water by native hydroponic plants and may serve as a strategy to remediate PFAS water.

“PFASs are often referred to as ‘forever chemicals’ because they don’t break down, instead of accumulating in the environment and in our bodies where they can cause adverse health effects,” said Dr John Awad, a researcher for UniSA and the Commonwealth Scientific and Industrial Research Organisation (CSIRO)

PFAS is a large and expanding group of manufactured chemicals widely used in everyday products.

It is found in Teflon for non-stick cookware and also found in firefighting foam to improve its effectiveness.

The problem with PFAS is that it cannot be broken down in the environment or in our bodies, and higher concentrations of PFAS in bodies have been linked with adverse health effects including increased risk of increased cholesterol, weaker immune system, changes to the liver, increased blood pressure, decreased infant birth weights as well as an elevated risk of kidney or testicular cancer.

The collaboration between UniSA, CSIRO and the University of Western Australia (UWA) therefore looked into possibilities of removal from the environment.

The team tested native wetland plants for their effectiveness at removing PFAS from the water and constructed floating wetlands (CFWs) for the plants to grow.

Earlier studies have shown that plants can absorb PFAS chemicals from water, with studies in the U.S. showing certain indigenous tribes’ use of hemp to remove the chemical.

Overall, the team observed, “that Phragmites australis was the most effective at absorbing chemicals through its roots and shoots.”

The plant, also known as the common reed native to Australia, removed legacy PFAS [once used but now banned] contaminants by 42-53 percent from contaminated surface water.

After plantation, PFAS chemicals gradually accumulated in the roots or shoots of the plants, with accumulation increasing with exposure time. However, the efficiency of the plants decreased as concentration increased, indicating a possible need for replantation.

Awad says that the wetlands they constructed can be used for remedial purposes by installing it “into existing urban environments, such as holding reservoirs and retention basins.”

He said CFWs as a remedial water treatment system is cost-effective as it does not require pumping or ongoing addition of chemicals, and along with the use of native plants, the system is a “truly clean, green and environmentally-friendly method for removing toxic PFAS chemicals.”

However, the study highlighted the possibility that “CFWs have the potential to be used to reduce PFAS contaminants in surface waters,” giving the potential of its remedial uses in urban planning.

Though the findings of the research seem promising, the authors noted that the research was all conducted in laboratory settings and still needs real-world testing for the scientists to be certain the plants will help in a real-world setting.