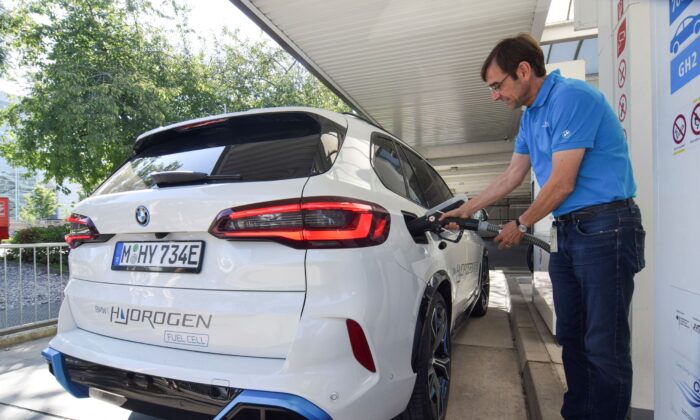 Juergen Guldner, a vice president at BMW in charge of the carmaker's hydrogen car program, fuels a hydrogen fuel-cell prototype SUV at a petrol station in Munich, Germany on Sept. 3, 2021. (Nick Carey/Reuters)
Australia

While not opposed to hydrogen, newly elected federal MP Colin Boyce says governments are a long way off from efficiently tapping into the chemical to power the country, warning there were “huge issues and problems” that have received little coverage.

In an address to the 47th Australian Parliament, the representative for Flynn—located in central Queensland (a heavy coal-mining region)—said the city of Gladstone in his electorate was slated for a major green hydrogen industry.

“Hydrogen is promoted as a saviour, the silver bullet for future energy needs,” the Liberal-National MP told the Parliament. “Hydrogen is extremely dangerous. It is extremely flammable and has specific qualities that make industrial quantities of hydrogen very difficult to produce, store, transport and use.”

He pointed to several major examples where hydrogen usage had gone wrong, including the 1986 Challenger space shuttle explosion, the 2011 Fukushima nuclear accident, and the recent explosion of the Callide C coal-fired generator.

“You can’t mine hydrogen; you have to make it. Through water electrolysis, we can destroy the water molecule and produce hydrogen and oxygen,” he said, noting that the amount of renewable energy needed to power this process was “enormous.”

Generating hydrogen is a key puzzle piece in the push for net-zero and phasing out of coal-fired generation.

An energy grid powered by renewables requires enormous amounts of storage—and billions of dollars and materials—to make the system viable.

Currently, giant lithium batteries are the preferred method of storing excess electricity from solar panels and wind turbines—this storage needs to be tapped when the wind is not blowing or the sun isn’t shining, particularly at night during peak power usage.

Although battery technology is improving, there are still numerous drawbacks; for example, the world’s largest battery system, the FPL Manatee Energy Storage Center in Florida, can provide only two hours of power to approximately 329,000 homes at a time.

For renewable energy systems like pumped hydro, the storage element is simply the building of dam systems to store huge volumes of water, which is then pumped back through turbines to generate electricity. However, not every country or region has access to the right environmental conditions to take advantage of hydro.

So governments have invested billions into hydrogen technology to find another solution. Instead of charging batteries with excess electricity, the power is fed through electrolysers (an energy-intensive process) which then creates hydrogen to fill reservoirs, which can be used as a new energy source or synthetic fuel.

Yet like many new technologies in the net-zero push, it is still in the early days of its development.

“The main problem really is hydrogen is very low density,” Nick Kastelstein, oil and gas engineer at GPA Engineering. “So it’s a third the energy density of methane, and it takes a lot of energy to compress it.”

“Then you have round trip efficiency as well. So the process of creating hydrogen from electricity has a maximum 80 percent efficiency—so already you lose 20 percent of your energy. Once you take it back to electricity, you lose even more.”

Meanwhile, Boyce provided a rough example of how much renewable energy would be needed to power the electrolysers behind the industrial-scale hydrogen.

“If you multiply that by a factor of a hundred, you get three million tonnes of hydrogen, which is getting into the realms of industrial quantities,” he said.

Coopers Gap has 123 wind turbines currently, and increasing that by a factor of 100 would result in 12,300 turbines. While the original wind farm cost $850 million to build, a substantial 100-fold increase in its size would cost over $100 billion.

“The footprint of a large wind turbine is approximately 25 hectares. In rough round figures, 3,000 square kilometres of land would be required for the wind farm scenario. To put that into perspective, there’d be a wind turbine every few hundred metres all the way from Gladstone to Biloela in a corridor 30 kilometres wide. I shall require more staff in my office to deal with the complaints.”

The MP also said the electrolyser process would need about 10 litres of water to create one kilogram of hydrogen and that currently, the government had no plans for large storage of water.

“There are proposals to build desalination plants and use seawater, but this requires more energy and creates the problem of dealing with the brine that is created. Pumping brine into the ocean would be devastating for the Great Barrier Reef.”

“I have no doubt that a hydrogen industry will be developed in Gladstone. However, the practical and economic realities of doing this on a huge, industrial scale have not been investigated or understood.”

His speech comes as the federal Labor government submits its Climate Change Bill 2022, which will enshrine a new emissions reduction target into law. The Labor Party has upped the previous government’s target of 26-28 percent by 2030, to 43 percent.

According to Climate Change Minister Chris Bowen, “2030 is 89 months away. We do not have long to achieve these goals. We have been waiting too long, and now is the time to get on with it.”