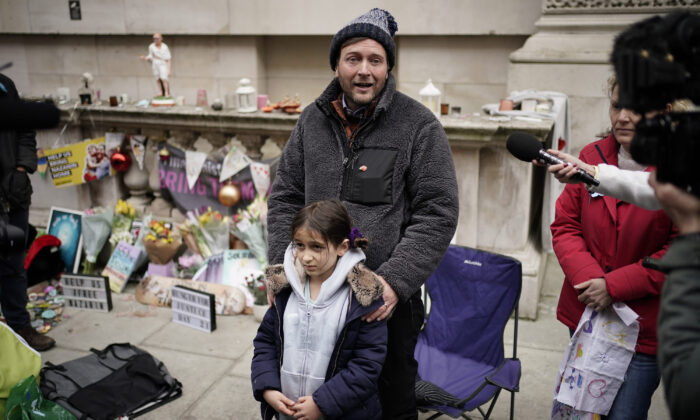 Richard Ratcliffe, the husband of Iranian detainee Nazanin Zaghari-Ratcliffe, with his daughter Gabriella as he ends his 21-day hunger strike outside the Foreign Office in central London on Nov. 13, 2021. (Aaron Chown/PA)
UK

The husband of Nazanin Zaghari-Ratcliffe has criticised Prime Minister Boris Johnson as he ended his hunger strike in central London after almost three weeks.

He began his demonstration on Oct. after his wife lost her latest appeal in Iran, saying his family was “caught in a dispute between two states.”

On Saturday morning on King Charles Street, where Ratcliffe has been staging his hunger strike, he told the PA news agency it was “the right time” to bring it to an end.

“We probably hoped we’d get a breakthrough doing this. We haven’t yet,” he said.

“I didn’t want to go out in an ambulance. I want to walk out with my head held high.”

Ratcliffe criticised the prime minister for his “telling” absence in talking to him during the protest, adding that Johnson “hasn’t honoured his promises” and “hasn’t dealt adequately with Nazanin’s case for years.”

“He should be more mindful of that. He shouldn’t just walk away from promises made,” Ratcliffe said.

Ratcliffe said Defence Secretary Ben Wallace stopped to visit him earlier, and one other government minister has come to see him, but he acknowledged he has seen more people from the Labour benches during the demonstration.

“We’ve certainly not had the prime minister come. And yes, I do think he has the capacity to do a disappearing act,” he said.

“I think his absence this past three weeks is telling. His absence on Nazanin’s case since he became Prime Minister is reasonably telling.”

Ratcliffe said he may have been “naïve,” saying “I did expect he [Johnson] would step up and sort it and he would deliver on the promises he made as [the] foreign secretary once he had the power to do so.”

Writing on Twitter earlier on Saturday, Ratcliffe’s local MP Tulip Siddiq called on Johnson to “take 5 minutes out of his day to visit my constituent.”

Ratcliffe said he backed Siddiq’s view and said it is “probably too late” for Johnson to visit him now, and he added that his wife has also requested a phone call from the prime minister.

Siddiq said she has been in touch with Zaghari-Ratcliffe, who she said is “worried sick” about her husband.

“It has been agonising to watch my constituent starve himself for so long and put himself deliberately in harm’s way,” the MP said.

“Richard has shown such dedication, bravery, and dignity over the last three weeks, and indeed over the last five years,” she added.

“I know how proud his family are of him, and how much of an impact his personal sacrifice has had on the millions of people around the world who want to see their family reunited.”

The hunger strike ended with the unveiling of a patchwork made from all the patches supporters have been sending throughout Ratcliffe’s time camped outside the FCDO.

Ratcliffe said he was starting to get pains in his feet overnight, and after a chat with a doctor, the decision was made to end the hunger strike.

He said he plans to go to the hospital to get checked out on Saturday afternoon and then hopes to be able to eat something after that.

Ratcliffe, who was joined by seven-year-old daughter Gabriella on Saturday, said of his time camped out: “It’s been a lovely experience emotionally. Tough physically. But yeah, I think it probably is the right time to end it.”

He offered a “warm thank-you” to everyone who has supported him.

“I wouldn’t have got through this alone,” he said. “Such an experience of kindness. I have been humbled by the care we’ve received.”

A crowd of well-wishers clapped as Ratcliffe made his way to a vehicle outside the FCDO just before 2:10 p.m.

There were cheers as the vehicle drove up King Charles Street towards Whitehall.

Zaghari-Ratcliffe, a British-Iranian dual national, has been in custody in Iran since 2016 after being accused of plotting to overthrow the government.

She was taking the couple’s daughter Gabriella to see her family when she was arrested and sentenced to five years in jail, spending four years in Evin Prison and one under house arrest.

According to her family, she was told by Iranian authorities that she was being detained because of the UK’s failure to pay an outstanding £400 million ($537 million) debt to Iran.

While Ratcliffe said the government “clammed up” and would not talk about the debt during his discussion with officials, The Guardian newspaper reported that the UK told Iran it could not pay the debt owing to restrictions brought about by sanctions, quoting Tehran’s deputy foreign minister.

According to the paper, Bagheri Kani said the two sides had agreed on a payment of less than £500 million ($671 million) taking interest into account, and added: “Now what the UK government are bringing up is the limitations on banking interactions, saying it is a difficulty, and finally they cannot do it.”

It is the second time Ratcliffe has gone on hunger strike, having camped in front of the Iranian embassy for 15 days two years ago—a move he said had resulted in getting his daughter home.

During Ratcliffe’s latest demonstration he has been visited by supporters including Strictly Come Dancing co-host Claudia Winkleman, writer and presenter Victoria Coren Mitchell, and Labour leader Sir Keir Starmer as well as his local MP Siddiq.

Siddiq said she has secured a debate in Parliament on Zaghari-Ratcliffe’s situation and urged people to contact their MPs to ask them to speak in Tuesday’s discussion and “make the case for bringing Nazanin home.”

She said the debate has attracted cross-party support, adding: “Nazanin told me that she’ll be watching the debate and praying that she hears something new from the government.”