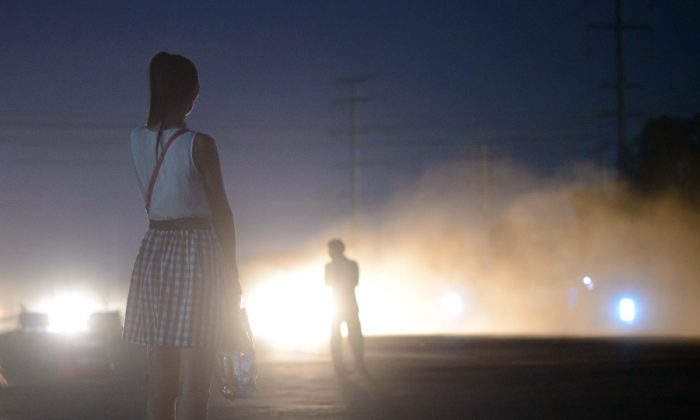 A woman waiting for a bus at night. (Ed Jones/AFP/Getty Images)
Social Issues

Intense debate and reactions boiled on Chinese social media after a man posted a video of his wife being abducted at the front door of their house after an evening of drinking.

The footage shows the man opening the door for his wife and greeting her. Then he turns around to walk back inside, leaving her all alone as she passed out against the wall, where she was taken away by another man only three minutes later, according to multiple Chinese media outlets.

The woman, surnamed Sang, 33, was found in a wooded area near their housing complex nearly an hour later by her 10-year-old daughter on June 11, according to the Sichuan News Channel. The woman appeared to have been violated by the man in Chengdu City, Sichuan Province, China.

Several days after the incident, the husband, surnamed Liu, released security footage of his wife being abducted online on June 14, saying that people online would be able to help identify the man.

After the video was shared, a wide range of arguments sprung up on Chinese social media of the behavior of the suspect, the husband Liu, and even the wife Sang.

The security footage that Liu shared showed him opening the door for his wife at 8:54 p.m. on June 11. The main door leads to the rest of the housing units in the building.

Liu can be seen walking out of the house and opens the door for Sang. After he opens the door, Sang steps in and leans against the wall. Liu turns and immediately walks back to their house, leaving Sang at the doorway.

Within just seconds of Liu walking away, Sang collapses to the floor, with the main door still open, as seen on the security footage.

“He later told me that he was getting medicine, getting medicine for our child,” Sang told the Sichuan News Channel. Sang said she did not remember how much she drank. She said she went out to drink because her mother-in-law said some unpleasant things that upset her.

Conflicts between a husband’s wife and his mother is a common point of contention in Chinese family life.

Then, three minutes after falling to the ground, a strange man comes and picks her up. He carries her forward a few steps, looking down the hallways, and then the worst happens.

He turns around and carries her out the opened door.

“When I got out of the car, no one followed me,” Sang told the Sichuan News Channel. “I don’t know where that man came from, and I don’t know him.”

One hour later, the husband comes back down once more looking for her. The daughter joined the search, and found her mother among the bamboo trees, just 33 feet (10 meters) from the front door.

Sang was almost unconscious, laying face down on the dirt.

Pictures taken suggest that the man sexually assaulted her. Sang also said that the two smartphones she was carrying, along with 2,000 yuan ($290) were missing.

Liu then contacted the police, and Sang was taken by ambulance to a local hospital, according to Chinese online news outlet Red Star News. The police began an investigation on June 13.

On June 14, Liu released the videos of the abduction online, saying that he hoped others would recognize the man and help apprehend him, according to Red Star News.

No further details were given about the man who carried Sang out the door.

Many users voiced strong opinions online regarding the actions of all involved. Some criticized the husband for his choice in handling the matter.

User “Summer Rivers_Rubbish” quoted the report from Red Star News and wrote: “‘Her husband went to the second floor after opening the door, not paying attention to her,’ unbelievable.”

User “Everything About Every Night” replied to the above comment: “So it was because of her mother-in-law that she got drunk. This mother and son are unbelievable.”

Others compared the husband to the criminal.

User “Sui Dynasty Siyao” wrote: “Seeing his drunk wife, [he] ignores her and goes back upstairs? And he’s not even embarrassed to share the video? The criminal and this so-called husband are both dregs.”

A sarcastic comment was added by “Only Having Stallions” who wrote: “This husband is awesome, he opens the door and doesn’t care.”

In response, web user “Palette of Rainbow” wrote: “So I feel it’s weird, after discovering this thing that will destroy his wife, with a video so clear, the police should [be able to] very quickly solve the case. Why would it be necessary to put the video online? If you want to get divorced just hurry up and do it, don’t be like a personal enemy and put your wife in place with no hope of reprieve.”

Some comments suggested that women should be more responsible.

User “weini_qidao” wrote: “This event tells all female friends, at all times you should take care of yourself, don’t blame others! Even the man who is your guy can’t be relied upon.”