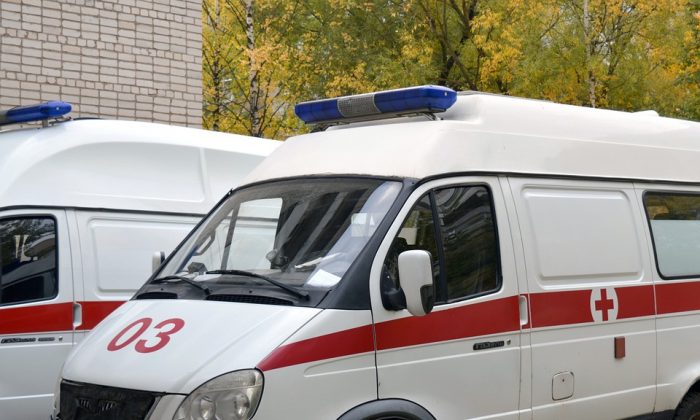 Stock photo of an ambulance
Trending

Jeanette and Alexander Toczko got married in 1940 and spent more than 75 years together—and her family has recalled the moment they both passed away within hours of one another.

Jeanette, 96, and Alexander, 95, first met when they were 8 years old and fell in love and later became boyfriend and girlfriend soon before they got married.

Along the way, they had five children and moved to San Diego, Calif., where they spent most of their days.

Couple married 75 years ago dies together on their anniversary http://t.co/ICwfXeF2XK pic.twitter.com/XpbuxjgBid

But ultimately, Alexander suffered a broken hip and was left bed-ridden, 10News reported. His health condition took a turn for the worse, and their family recalled that the couple always said they would like to die “in their own bed, holding hands, in each other’s arms.”

So doctors gave him a special bed, which was moved next to his wife’s bed.

The couple was to celebrate their 75th anniversary and their family brought in balloons and flowers. After a short celebration, the family left the couple by themselves. Later, doctors were stunned to find that Alexander passed away in his wife’s arms, according to 10 News.

Couple married for 75 years die within hours of each other, holding hands http://t.co/OxlluCdT3K pic.twitter.com/Err1FQnTW4

“Even the hospice nurse said it was the most incredible thing to see the two of them taking those last breaths together,” daughter Aimee Toczko-Cushman said.

She added: “She hugged him and she said, “See this is what you wanted. You died in my arms and I love you. I love you, wait for me, I’ll be there soon.’”

According to the couple’s obituary, here’s their story:

According to Al and Jay, they met and fell in love when they were eight years old. For many years, “Tucker,” as Al was known in his childhood, carried in his wallet a photograph of Jay dressed for her first communion. Their commitment to each other transcended time. They were born in Stamford, Connecticut in 1919 to parents who came from Poland. …

Husband and Wife, 93, Die in Nursing Home Within Hours of Each Other

Contrary to expectations that a hired man’s son would work alongside his father in the fields, Joseph wanted his son to spend his days in school in order to receive a formal education. Al served during World War II in the US Navy as a telegraph operator. Al returned home safely to his growing young family after the war and began in earnest to pursue work in advertising and art direction which led him to a very successful career in New York City during the heyday of Madison Avenue advertising of the 1950s and 60s. …

The couple moved to San Diego in 1971 with their youngest daughter. Drawing on his many years of experience in New York City and his deep knowledge of the creative process, Al established his own advertising and fashion photography firm, Blue Sky, from the house/ studio he had designed and built in the hills above Pacific Beach. Jay served expertly as his chief stylist. Together they made a formidable creative team for the next 15 years, spearheading award-winning campaigns for many Southern California businesses and non-profit organizations.