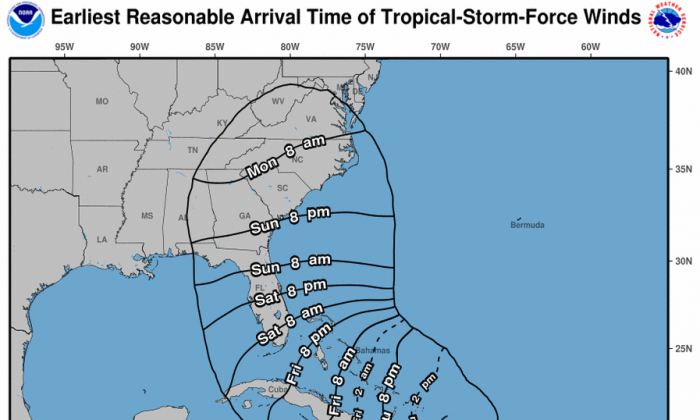 A hurricane watch was issued for South Florida ahead of Hurricane Irma, said the National Hurricane Center (NHC) on Thursday morning.

A hurricane watch, specifically, means that gale and storm force winds of 75 mph are possible within 48 hours in a specified area. A hurricane warning is an upgrade over a watch, meaning that the winds can be expected within 36 hours.


The NHC said that a storm surge watch was issued for the Florida peninsula from the Jupiter Inlet southward. Bonita Beach and the Florida Keys are included.

Those areas could see a surge of five to 10 feet.

“The deepest water will occur along the immediate coast in areas of onshore winds, where the surge will be accompanied by large and destructive waves,” the agency said.

The Cuban regime also extended a tropical storm warning to Villa Clara province, according to the NHC.

A hurricane warning is in effect for:

A hurricane watch is in effect for:

A tropical storm warning is in effect for:

Hurricane Irma is still a Category 5, the strongest type, and is packing winds of up to 185 mph. The storm has already ravaged the Caribbean islands, including St. Martin, Barbuda, and some of the British Virgin Islands. Reports say that at least 10 people have died in the storm so far.

Forecasters expect Irma to weaken to a Category 4 storm before it hits Florida.

Anthony Sagliani, who is the meteorological operations manager at weather data firm Earth Networks, told Newsweek on Thursday that there is a “slight weakening trend ongoing” in Irma. It will, however, “remain a [Category] 4-5 thru the next 72-96 hours at least.”

Irma is expected to be on top of the Florida Keys by 8 a.m. Saturday.