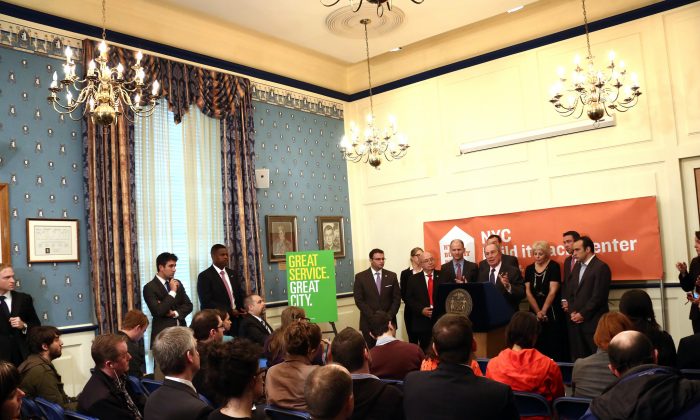 Patricia Dresch lost her husband George and 13-year old daughter Angela on the night of Oct. 29, 2012, when the historic storm made landfall in Tottenville, Staten Island. The house was swept off its foundations by the storm surge with her family inside. Dresch was knocked unconscious and survived.

“I don’t think any of us can ever feel your pain,” Bloomberg said from Staten Island Borough Hall on Thursday afternoon. “I think you, as an example, can help others deal with tragedy and try to build a new life.”

Dresch said despite living in the house for 35 years, she could not live there any longer.

“I am saying goodbye to something I lived in for 35 years and now I am able to move on to something new, a new chapter in my life,” Dresch said.

She currently lives in the rectory of Our Lady Help of Christians parish church, a place she has resided at since the storm, where she teaches religious instruction to the students of the parochial school.

Dresch will continue to call Tottenville home, albeit further inland. She has a pre-contract on another home and hopes to move in within a few months. When she does, the mayor promised to come to her house for dinner, an offer she accepted.

Congressman Michael Grimm (D-N.Y.), who represents the area, joked that he was already on the list for the first meal, and the mayor said they could all have dinner together.

Selling to the City

The acquisition program will allow the city to redevelop the land into a more resilient property.

“The idea is to not put this into open space, but to redevelop it for uses that are consistent with the character of the neighborhood, and in line with what the community would like to see the projects developed as,” said Brad Gair, director of the Mayor’s Office of Housing Recovery Operations.

Other homeowners near Dresch have also applied for the acquisition option. The mayor could not confirm the total number of applicants, or if and when they would be approved.

The city program differs from the state program. The state program returns land back to its natural state in order to mitigate future flooding, something expected in the coming years due to climate change. Homes in the heavily damaged Oakwood Beach neighborhood of Staten Island are participating in that program.

The mayor said the plans do not compete, rather they give homeowners, as well as the city, options for the damaged property.

Bloomberg said he did not expect the federal shut-down to affect Sandy recovery efforts, so long as it doesn’t drag on.

“If it ends in the next week or two, which would be my guess—but I don’t know any more than you do—it will be a little bit annoying, but it really won’t have a great effect,” the mayor said. “If it goes on for a long time, it could be very damaging.”