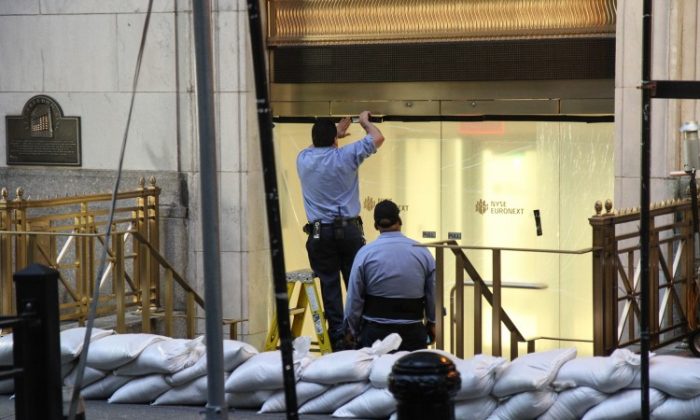 Mayor Michael Bloomberg giving an update on hurricane preparations at Seward High School, the site of one of the 76 shelters in New York City. (Kristen Meriwether/The Epoch Times)
US

NEW YORK—Hurricane Sandy moved north off the Atlantic coast throughout Sunday, and is expected to peak in New York Monday.

Transportation systems, including subways, buses, and commuter rails, shut down beginning at 7 p.m. Sunday night with a potential for them to stay closed as late as Wednesday. Many businesses closed and will remain closed Monday and Tuesday. Schools are closed Monday and may be closed Tuesday and even Wednesday.

Mayor Michael Bloomberg gave two updates Sunday, the first one announcing that evacuations of Zone A had become mandatory. Zone A includes low-lying areas throughout the city, such as Coney Island, Battery Park, and much of Lower Manhattan abutting the water, and the Rockaways.

“The most important thing I can say right now is if you live in Zone A, evacuate,” said Bloomberg in his 4 p.m. talk, broadcast live from Seward High School. Evacuees were encouraged to locate family and friends they could stay with, or seek refuge in one of the 76 shelters within school buildings across the city, such as in Seward High School.

Zone A areas include about 25,000 public housing residents, all of which had their heat and hot water shut off beginning at 7 p.m. Sunday. Bloomberg said other zones are not expected to be evacuated, nor is Rikers Island.

The storm is serious, according to weather reports. Stu Ostro, senior meteorologist with The Weather Channel, posted an online report Sunday afternoon that described Hurricane Sandy as a “meteorologically mind-boggling combination of ingredients.”

“One of the largest expanses of tropical storm (gale) force winds on record with a tropical or subtropical cyclone in the Atlantic or for that matter anywhere else in the world; a track of the center making a sharp left turn in direction of movement toward New Jersey in a way that is unprecedented in the historical database, as it gets blocked from moving out to sea by a pattern that includes an exceptionally strong ridge of high pressure aloft near Greenland; a ‘warm-core’ tropical cyclone embedded within a larger, nor’easter-like circulation; and eventually tropical moisture and Arctic air combining to produce heavy snow in interior high elevations,” Ostro continued.

“This is an extraordinary situation, and I am not prone to hyperbole,” he said.

Decelerations of emergency have been issued in states along the East Coast including New York, North Carolina, and Maryland.

National Guard personnel and others were mobilized by governors, including New York Gov. Andrew Cuomo.

Yet despite many businesses shutting early Sunday—including the chains Chipotle, McDonalds, Starbucks, Trader Joe’s, and Best Buy, with the exception of CVS—a spate of small businesses and street vendors remained open on the street.

“From where we are from, this storm is nothing,” said Mdali Alif, 15, of Bangladesh, who was working in a food truck on Wall Street. The area, apart from some tourists, was mostly shut down by Sunday afternoon. Orange, large bags of sand were placed in front of many buildings, preparing for a storm surge estimated from 6 to 11 feet Monday afternoon.

Memories of Hurricane Irene (later downgraded to a Tropical Storm) lingered in the minds of some, prompting little fear of what is—or is not—coming.

“We’re not scared because it’s just like last time,” said Ali, manager of Star Gourmet Deli and Pizza in the Flatiron District, which is open 24 hours a day. “A little rain is nothing. If it gets bad we’ll close down the shop and sleep in the basement.”