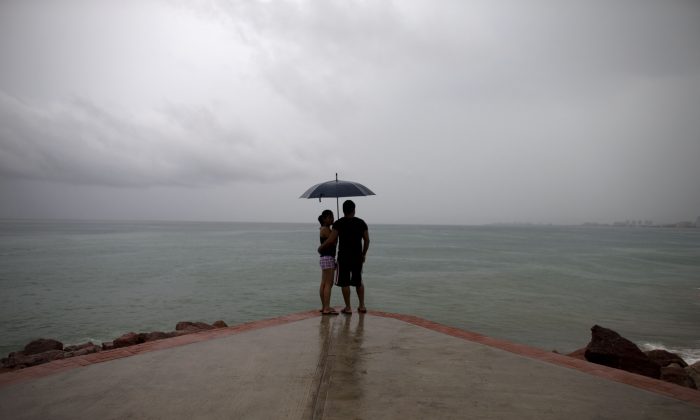 A couple looks out to sea as rainfall increases with the approach of Hurricane Patricia in Puerto Vallarta, Mexico, Friday, Oct. 23, 2015. (AP Photo/Rebecca Blackwell)
Americas

Hurricane Patricia Drenches Mexico as It Weakens to Tropical Storm

Patricia, which peaked as the strongest hurricane on record in the Western Hemisphere, made landfall Friday on a sparsely populated stretch of Mexico’s Pacific coast as a Category 5 storm, avoiding direct hits on the resort city of Puerto Vallarta and major port city of Manzanillo.

There were reports of some flooding and landslides, but no word of fatalities or major damage as the storm pushed across inland mountains while bypassing the metropolis of Guadalajara overnight.

Residents of the coast where Patricia came ashore last night described an enraged sea that crashed into hotels, scooping beach away from their foundations, and howling winds that toppled trees and telephone posts.

“The waves were coming into the hotel,” said Domingo Hernandez, a watchman at the Hotel Barra de Navidad in the resort village of the same name in Jalisco state.

“All the streets here in town are full of downed trees all over the place,” said Hernandez, who described Patricia as the strongest storm he’s seen in a quarter century of living on the coast. “You have to make your way around all the downed telephone poles, the power lines, the trees.”

People snapped selfies next to a sculpture overlooking the sea and business owners swept sidewalks as they would on any morning. There were puddles downtown, but nothing more than a passing thunderstorm might leave.

Maximiliano Macedo of Puerto Vallarta strolled arm in arm with his wife down the waterfront to see things by the light of day.

“Fortunately, nothing happened here,” Macedo said. “Like everybody else, our family we got prepared,” Macedo said; the family stockpiled supplies, taped the windows and readied the radio. But he said when Patricia made landfall south after 6 p.m., they began to relax.

President Enrique Pena Nieto issued a taped address late Friday, noting that while initial reports indicate damage has been less than those expected, “We cannot yet let our guard down.”

The U.S. National Hurricane Center said Patricia had weakened to a tropical depression by midday Saturday with maximum sustained winds of 35 mph (55 kph). Remnants of the storm were expected to feed existing rainstorms hitting southern Texas.

Tourist Brandie Galle of Grants Pass, Oregon, said she had been sheltered with other guests in a ballroom with boarded-up windows at the Hard Rock Hotel in Puerto Vallarta. When the city was not feeling any major effects from the storm two hours after landfall, workers let them out to eat at a hotel restaurant.

Galle said some guests desperate to leave had earlier paid $400 for taxis to drive them the 120 miles (200 kilometers) to the inland city of Guadalajara.

The airports in Puerto Vallarta, Manzanillo and Tepic were closed Friday, but officials announced an air bridge Saturday to ferry stranded travelers out of areas hit by the storm. Officials said the bus station was reopening.

Residents and tourists had hunkered down in shelters and homes along a coastal stretch dotted with sleepy fishing villages and a few posh resorts that offer rooms for more than $1,000 a night.

The Sokols, a family of five from suburban Detroit, were supposed to fly out of Puerto Vallarta on Friday but ended up for hours in a shelter at a university after their flight was canceled. By night they were back where they began: at their hotel, and no worse for wear.

“It’s amazing it went from the worst in history to just some heavy rain,” Susanna Sokol said, noting that at least the hurricane gave her daughter a birthday to remember.

“It was pretty stressful for a while,” Tom Sokol said. “I felt guilty for taking my kids here.”

Patricia formed suddenly Tuesday as a tropical storm and quickly strengthened to a hurricane. Within 30 hours it had zoomed to a Category 5 storm, catching many off guard with its rapid growth.

By Friday it was the most powerful recorded hurricane to hit the hemisphere, with a central pressure of 880 millibars and maximum sustained winds of 200 mph (325 kph), according to the National Hurricane Center.

One of the worst Pacific hurricanes to ever hit Mexico slammed into the same region, in Colima state, in October 1959, killing at least 1,500 people, according to Mexico’s National Center for Disaster Prevention.

Patricia also threatens Texas, where flooding already has caused a train derailment. Forecasters said that even after Patricia breaks, up its tropical moisture will likely feed heavy rains already soaking the state.

The Latest on Hurricane Patricia (all times local)

Patricia was once the strongest hurricane on record in the Western Hemisphere, but it has weakened rapidly since hitting land Friday evening.

By midmorning Saturday, the storm had sustained winds of 35 mph (55 kph) and it was located about 95 miles (155 kilometers) northeast of Zacatecas.

Remnants of the storm are expected to help feed rains over southern Texas.

People snapped selfies next to an iconic sculpture overlooking the sea and business owners swept sidewalks as they would on any morning. There were puddles downtown, but nothing more than a passing thunderstorm might leave.

Maximiliano Macedo of Puerto Vallarta strolled arm in arm with his wife down the waterfront unable to resist the curiosity of seeing things by the light of day.

In his words, “Fortunately, nothing happened here.”

Residents of the coast where Patricia came ashore last night describe an enraged sea crashing into hotels, scooping beach away from their foundations, and howling winds that toppled trees and telephone posts.

Domingo Hernandez is a watchman at the Hotel Barra de Navidad in the resort village of the same name. He says “waves were coming into the hotel,” and adds that “All the streets here in town are full of downed trees all over the place.”

He describes Patricia as the strongest storm he’s seen in a quarter century of living on the coast.

He says mountains around the city “served as a barrier.”

Patricia has been downgraded to a tropical storm as it moves across Mexico.

Patricia is centered about 35 miles (55 kilometers) northeast of Zacatecas, Mexico, and is moving toward the north-northeast at 21 mph (33 kph).

Hurricane Patricia continues to weaken, dropping to a Category 1 storm as it crosses Mexico.

The storm’s maximum sustained winds early Saturday had decreased to near 75 mph (120 kph) with rapid weakening expected to continue.

Patricia is currently centered about 50 miles (80 kilometers) south-southwest of Zacatecas, Mexico, and is moving north-northeast near 21 mph (33 kph).

The U.S. National Hurricane Center in Miami says Hurricane Patricia has weakened to a Category 2 storm, with sustained winds of 100 mph (155 kph).

But it is rapidly losing steam as it moves over a mountainous region inland from the shore.

Early Saturday, its center was about 135 miles (215 kilometers) southwest of Zacatecas, Mexico.

Authorities say that so far there are reports of flooding and landslides, but no word of fatalities or major damage.

Q&A: A Look at Mexican Coast in Path of Hurricane Patricia

Hurricane Patricia, the strongest storm recorded in the Western Hemisphere, made landfall Friday along a stunning section of Mexico’s Pacific coast that includes the major commercial seaport of Manzanillo and the popular tourist destination of Puerto Vallarta.

The area also includes stretches of isolated fishing villages against the backdrop of rugged mountains that can produce dangerous flash floods and landslides.

Here’s a look at the region:

Where did Patricia make landfall?

How many people are living in the region?

How big is Manzanillo’s port?

Manzanillo is Mexico’s main Pacific gateway for international trade. The port handles more than 25 million tons of cargo and nearly 2,000 freight vessel calls annually. Manzanillo International Terminal is one of Latin America’s largest container transshipment hubs. The city, called the “Sailfish Capital of the World,” also is known for its deep-sea fishing competitions, such as the Dorsey Tournament, and is a popular cruise ship destination.

What is the biggest tourist city in the area?

Puerto Vallarta is a top destination for Mexico’s $12 billion tourism industry, which ranks behind manufacturing, oil, remittances and foreign direct investment as the nation’s biggest source of revenue.

An iconic tropical getaway for many Americans, it was depicted in the 1964 movie “Night of the Iguana” with Richard Burton and Ava Gardner. The city has a large community of foreign residents. Many live in homes perched on dramatic hillsides overlooking the ocean.

The area’s tourism industry plummeted in the past decade over concerns about Mexico’s drug violence but has been rebounding recently with the return of several cruise lines.

Dotting the coastline are small fishing villages popular among surfers and backpackers, who sling hammocks under makeshift shelters made from palm fronds.

What other places could see significant rainfall?

Guadalajara is Mexico’s second largest city by population, with 1.4 million residents. With a picturesque colonial center, it is the birthplace of Mariachi music. It has a bustling art scene and several universities. Other popular tourist spots that could be affected include Lake Chapala near Guadalajara, where more than 30,000 Americans, mostly retirees, spend part of the year, and the town of Tequila, home to the popular liquor.