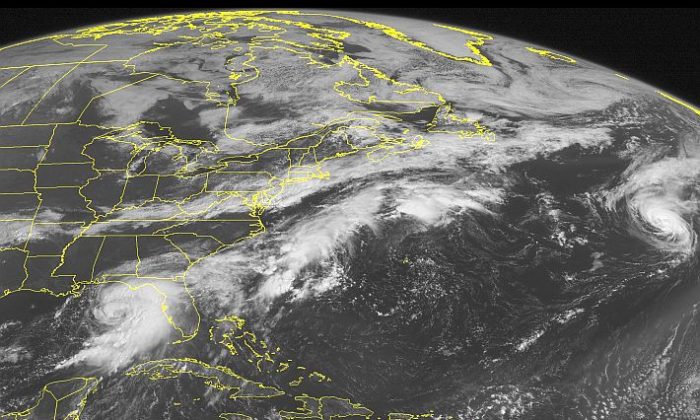 This NOAA satellite image taken Thursday, Sept. 1, 2016, at 9:45 AM EDT shows very active weather over the eastern half of the United States. A cold front extends from southern New England into the central Mississippi River Valley. Showers and scattered thunderstorms will develop along this front as the afternoon progresses. High pressure will keep the Great Lakes and Ohio River Valley cool and dry. Tropical Storm Hermine continues to gain strength in the northeastern Gulf Of Mexico. Hermine is forecast to strengthen into a Category One hurricane as it moves toward the "big bend" of Florida and will make landfall sometime late tonight into very early tomorrow morning. Hermine will pack rainfall will totals over six inches, hurricane force winds, and a storm surge up to eight feet as it makes landfall somewhere close to Tallahassee. She will then move quickly to the northeast into southern Georgia and into the Carolinas during the day tomorrow. (Weather Underground via AP)
US

ORANJESTAD, Aruba—”Matthew” is now at hurricane strength Thursday as it moved toward the islands of Aruba, Bonaire and Curacao in the Southern Caribbean.

The so-called “ABC islands” of the Dutch Caribbean are outside the hurricane belt and are usually spared from tropical storms, making Matthew a rare event for the area. A tropical storm watch was in effect for all three places.

The Aruba weather service said the storm was expected to pass about 125 miles (200 kilometers) north of the island.

About Half of Flood Zone Residents in Iowa Evacuated

Matthew passed over the eastern Caribbean on Wednesday, causing at least one death. Officials in St. Vincent say a 16-year-old boy was crushed by a boulder as he tried to clear a blocked drain.

#HurricaneMatthew is the 5th hurricane of the Atlantic season. pic.twitter.com/zQ70X4j6Ia

Tropical storm-force winds extended out for 205 miles (335 kilometers). It was forecast to become a hurricane later Thursday, then turn to the north and head toward Jamaica, Cuba and Haiti.

Reports have noted that Matthew’s forecast is similar to Hurricane Hazel in 1954, which hit the mid-Atlantic and Northeast United States.

Hazel hit the region as a Category 4.