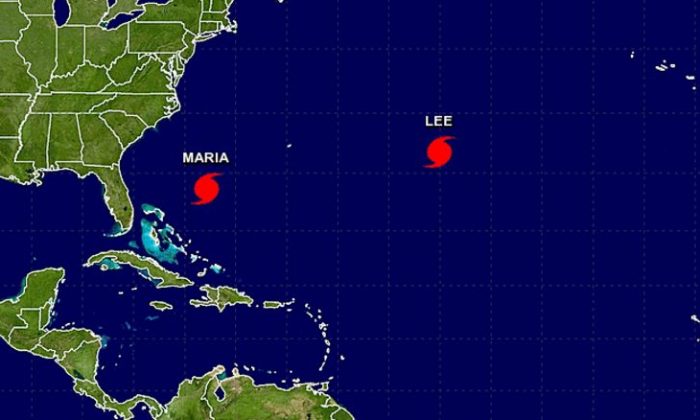 Hurricane Lee formed in the Atlantic Ocean on Sunday, the National Hurricane Center said in a 5 a.m. update.

Lee is now a Category 1 storm with winds of 85 mph, located about 860 miles east of Bermuda and 1,370 miles west of the Azores islands.

“It is not a threat to land,” the National Hurricane Center said.

Lee originally developed about two weeks ago and strengthened to a tropical storm on Sept. 16 before weakening a few days later. But its remnants moved north and started to redevelop into an organized tropical storm.

The storm, according to forecasters, could strengthen into a Category 2 hurricane.

Meanwhile, Hurricane Maria is continuing to weaken and is now Category 2.

The storm is moving northward into the western Atlantic Ocean.

“Maria is likely to make a close brush with the North Carolina Outer Banks, Virginia Tidewater by mid-week,” the Weather Channel reported. And, it added, “Tropical storm or hurricane watches may be issued soon.”