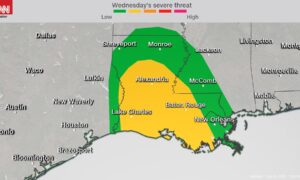 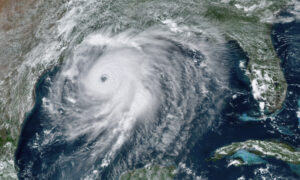 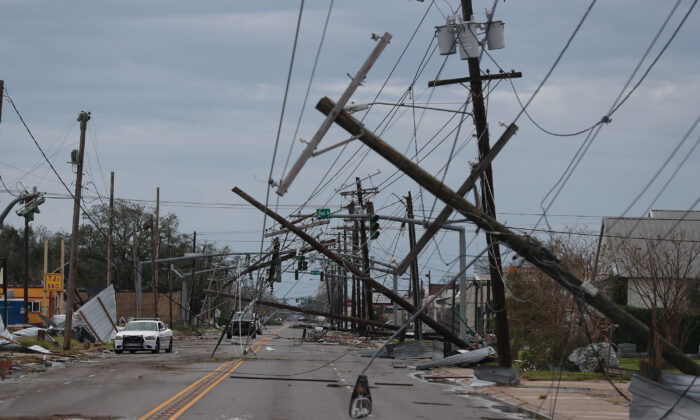 A street is seen strewn with debris and downed power lines after Hurricane Laura passed through the area in Lake Charles, La., on August 27, 2020. (Photo by Joe Raedle/Getty Images)
US News

The storm hit the state as a Category 4 storm but later was downgraded to a Category 1 later in the day, according to the National Hurricane Center (NHC) at 9 a.m. The NHC said that the threat of possibly deadly storm surge will continue along the Louisiana coast as Laura moved north.

Louisiana officials also issued a warning to those who didn’t evacuate from mandatory zones before Laura hit, saying that rescue efforts will not be initiated until the storm surge dissipates.

“Those choosing to stay and face this very dangerous storm must understand that rescue efforts cannot and will not begin until after storm and surge has passed and it is safe to do so,” the Vermilion Parish Sheriff’s Office said in a statement Thursday. “Please evacuate, and if you choose to stay and we can’t get to you, write your name, address, social security number and next of kin and put it [in] a Ziploc bag in your pocket. Praying that it does not come to this.”

“This is one of the strongest storms to impact that section of coastline,” said David Roth, a National Weather Service forecaster, according to Reuters. “We worry about that storm surge going so far inland there because it’s basically all marshland north to Interstate 10. There is little to stop the water.”

Officials said that the storm surge could raise water levels of up to 20 feet in some places.

“This surge could penetrate up to 40 miles inland from the immediate coastline, and floodwaters will not fully recede for several days after the storm,” the NHC said on Thursday.

Acting Department of Homeland Security Chad Wolf wrote at around 9 a.m. that Laura is still a dangerous storm, and locals are “not out of the woods yet.”

As of Thursday, about 400,000 homes across Lousiana and Texas were left without power, while local utility companies said that number is likely to rise, Reuters reported.

More than 620,000 people were under evacuation orders in Texas and Louisiana ahead of the storm on Wednesday.

Louisiana Governor John Bel Edwards told CNN on Thursday that there were no known deaths in his state yet.

“I don’t know how long that will hold up, but that’s a blessing,” Edwards said.