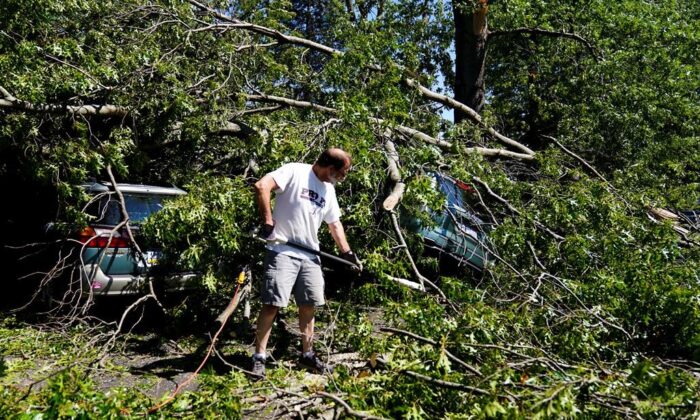 Larry Ackley helps clear a downed tree a fellow church member's home in Fort Washington, Pa. on Sept. 2, 2021 in the aftermath of downpours and high winds from the remnants of Hurricane Ida that hit the area. (AP Photo/Matt Rourke)
Canada

Hurricane Larry Could Be Headed for Newfoundland on Friday, but Track Uncertain

HALIFAX—Residents of eastern Newfoundland are being warned hurricane Larry could have an impact on the Avalon Peninsula on Friday.

The Canadian Hurricane Centre in Halifax has issued a tropical cyclone statement, saying some weather models are suggesting the storm will remain far offshore while others indicate it will travel across the peninsula, which includes St. John’s.

The major hurricane was churning out maximum sustained winds of 195 kilometres per hour today as it tracked north toward Bermuda.

Forecasters say the storm could transition to a post−tropical storm as a trough of low pressure approaches Atlantic Canada from the west, which could re-intensify the storm—but that scenario seems unlikely.

Large ocean waves stirred up by the hurricane will arrive along the Atlantic coast of Nova Scotia and southern Newfoundland on Thursday.

As a result, the Grand Banks marine district can expect strong winds and big waves later in the week.