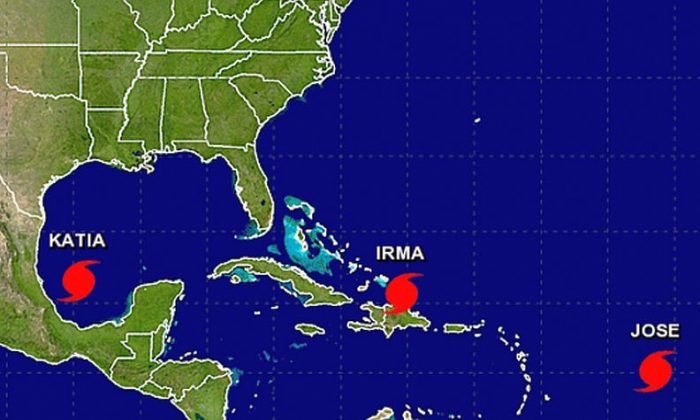 Jose Is Now a Category 3 Hurricane

Hurricane Jose is now a Category 3 storm, the National Hurricane Center (NHC) stated on Thursday, Sept. 7—just a day after the storm was upgraded to a hurricane.

The NHC reports Jose is threatening some of the same islands that were slammed by Hurricane Irma.

Currently, it’s about 600 miles east of the Lesser Antilles—a group of islands, which includes the Virgin Islands, St. Martin (which was devastated during Irma), Barbuda (totally destroyed), and St. Barts (also damaged).

Jose is now moving west-northwest at 18 mph. It has maximum sustained winds of 120 mph.

A hurricane watch is in effect for Antigua and Barbuda, Jose could approach those islands by Saturday.

Jose is slated to bring a total of two to six inches of rain to the Leeward Islands–from Dominica to Anguilla. Those rains could cause ongoing flooding, according to the NHC.


Hurricane Irma, a Category 5 storm, has killed at least 13 people so far. Three people have been confirmed dead in Puerto Rico.

The eye of the hurricane did not directly hit Puerto Rico, passing north early Thursday, battering the U.S. territory with high winds and heavy rains. Three people were killed and around two-thirds of the population lost their electricity, Governor Ricardo Rossello said.

The eye of Irma was moving west-northwest off the northern coast of the Dominican Republic, heading slightly north of Haiti, the NHC reports.

The United Nations Children’s Fund warned that millions of children could be at risk in the two countries, which share the island of Hispaniola. Impoverished Haiti has been particularly vulnerable to hurricanes and heavy rains.