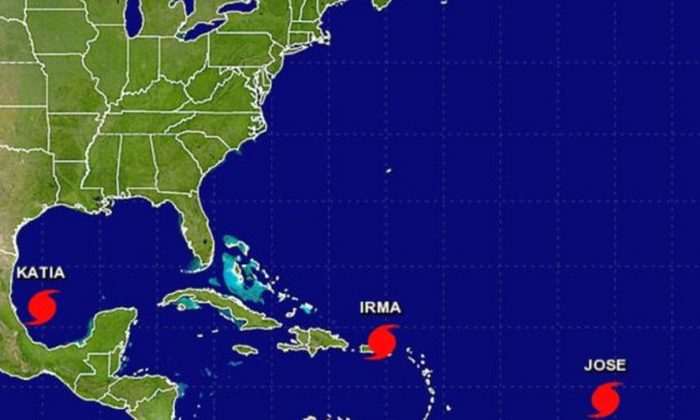 Hurricane Jose and Hurricane Katia formed on Wednesday, the agency stated, according to the 5 p.m. post. (NOAA)
International

There are now three hurricanes in the Atlantic, according to the National Hurricane Center in an update at 5 p.m. ET.

Hurricane Jose and Hurricane Katia formed on Wednesday afternoon, the agency stated, according to the 5 p.m. post.

They formed as Hurricane Irma, a Category 5 storm with 180 mph winds, is continuing to churn toward Florida.

Hurricane Katia formed in the southwestern Gulf of Mexico, and a hurricane watch is in effect for Mexico’s coastal state of Veracruz, and Hurricane Jose is “quickly strengthening,” the NHC said.

Jose has maximum sustained winds of 75 mph, and “interests in the Leeward Islands should monitor the progress” of the storm.

Jose’s center was located near latitude 13.9 North, longitude 45.8 West, the agency added, saying that it’s moving toward the west-northwest near 16 mph, and “this general motion is expected to continue for the next couple of days.”


Katia has winds of 75 mph, and it is “expected to produce total rain accumulations of 5 to 10 inches over northern Veracruz, and 2 to 5 inches over far southern Tamaulipas, northeast Puebla, and southern Veracruz through Saturday morning,” the NHC bulletin says.

“Isolated maximum amounts of 15 inches are possible in northern Veracruz. This rainfall may cause life-threatening flash floods and mudslides, especially in areas of mountainous terrain,” the advisory reads.

A hurricane watch is in effect for Tuxpan to Laguna Verde in Mexico.

Meanwhile, Irma ranks as one of the five most powerful Atlantic hurricanes during the past 80 years and is the strongest Atlantic storm ever recorded outside the Caribbean Sea and Gulf of Mexico, according to the NHC. Although Irma’s precise trajectory remains to be seen, forecasters described the storm as “potentially catastrophic.”

Hurricane Irma reached historic proportions on Wednesday, Sept. 6, becoming the only Atlantic or Eastern Pacific hurricane on record with sustained winds of 185 mph for over 24 hours, according to Eric Blake, a scientist with the National Hurricane Center (NHC).

Irma slammed Caribbean islands with pounding winds, rain, and surging surf on Wednesday as officials in Florida called for evacuations ahead of the storm’s expected landfall there this weekend.