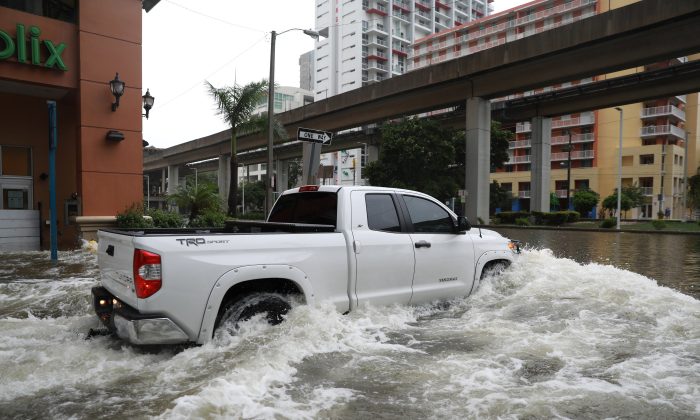 The storm is “still producing some wind gusts to near hurricane force,” the NHC stated.

The storm is located about 30 miles northeast of Cedar Key, 35 miles west of Gainesville, and 105 miles north-northwest of Tampa—with 70 mph winds, the NHC said.

There’s a tropical storm warning from Bonita Beach to the Okaloosa/Walton County Line, Jupiter Inlet to the South Santee River, and Lake Okeechobee, the NHC said.

A storm surge warning was issued for South Santee River southward to the Flagler/Volusia County line, Cape Sable northward to the Ochlockonee River, and Tampa Bay, the agency added.

The hurricane watch from north of Fernandina Beach to Edisto Beach has been discontinued.

The NHC stated that the storm surge warning was discontinued from south of the Flagler/Volusia County line to Jupiter Inlet.

“Stay inside. Go up. Not out,” Jacksonville’s website warned residents on Monday, Sept. 11. “There is flooding throughout the city and more rain is expected.”

That includes San Marco, South Hampton, Landon Park, and Riverside, which could all see a water rise of another 1 to 2 feet.

Reuters reported that nearly 6 million homes and businesses are without power in Florida.

Much of the state’s east and west coasts remained vulnerable on Monday to storm surges, when hurricanes push ocean water dangerously over normal levels. That risk extended to the coast of Georgia and parts of South Carolina, the hurricane center said.