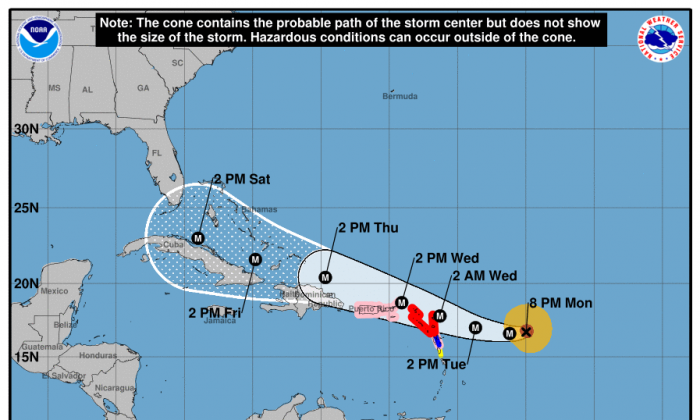 The order affects all 67 counties in Florida. Although the storm would potentially reach Florida on September 10, the governor declared the state of emergency early to give local, state and federal agencies ample time to prepare.

“Hurricane Irma is a major life-threatening storm and Florida must be prepared,” Scott said in a statement. Scott was briefed by the Florida division of the Federal Emergency Management Agency (FEMA) and the latest forecasts place Florida in Irma’s path.

“In Florida, we always prepare for the worst and hope for the best and while the exact path of Irma is not absolutely known at this time, we cannot afford to not be prepared,” Scott added.

It’s still too early to tell what impacts the southeastern U.S. can expect, but officials say the chances of Irma hitting Florida are increasing.

According to The Weather Channel, here’s when Irma might hit:

The latest forecast from the National Hurricane Center predicts that winds from Irma will begin to reach Florida at 2 p.m. on Saturday, September 9.

If the storm stays on the current path, it will hit Florida on September 10 with devastating winds reaching 155 miles per hour, according to a model developed by National Oceanic and Atmospheric Administration and mapped by Ventusky.com. That would make it a Category 4 storm, the same as Hurricane Harvey, which devastated Texas with historic floods.

Weather models also showed that there was more than a 50 percent chance the storm would reach the Florida region as a Category 4 or 5 storm, according to meteorologist Ryan Maue.

That would make it a Category 4 storm, the same as Hurricane Harvey, which devastated Texas with historic floods. If Irma reaches Florida as forecast, it would become a crushing one-two punch given that flooding from Harvey is not expected to recede for two more weeks.

A 5 p.m. advisory from the National Hurricane Center placed the storm 490 miles from the Leewards Islands. The hurricane is moving towards the Islands at 13 miles per hour with maximum sustained winds of 130 miles per hour.

Reports of Florida residents have been stocking up on essential goods surfaced on Sunday.

Florida residents have been encouraged to go get supplies by the middle of the week in case the hurricane hits Florida, CBS12 in South Florida reported.

Jacob Tibbs, a Home Depot manager in Palm Beach County, noted that “shoppers are already coming into the hardware store, picking up hurricane items: from generators to water,” said CBS12.

If people wait until the last minute, they might not be able to buy up basic supplies in time if stores run out of them.

“You can’t take a chance,” said David Yates, a 42-year-old automotive technician, told the website as he was buying supplies, including propane canisters, chain saw supplies, and mosquito repellent.

According to TCPalm, here are supplies one might need: