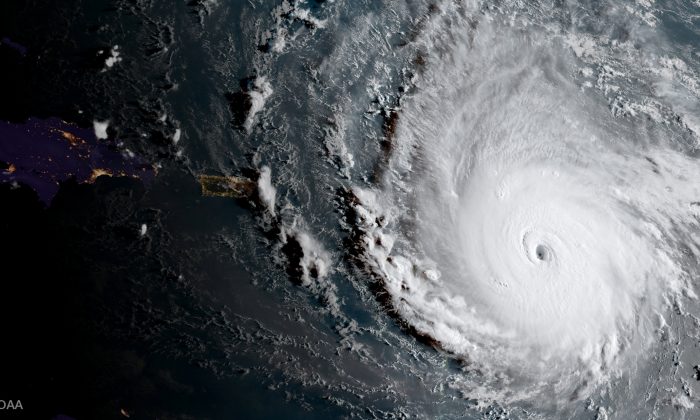 According to CBS News weather producer David Parkinson, Irma is now larger than the entire state of Florida. Weather forecast models show the hurricane reaching the state by this weekend.

Parkinson tweeted on Sept. 6 a photo comparing the size Irma to the State of Texas.

“Your image of the morning on @CBSThisMorning…#Irma is so expansive you could fit the entire state of Florida in it” he tweeted.

The area of Florida is about 65,755 square miles, meaning Irma is also bigger than Ohio and New York, The Daily Caller reported. Ohio is about 44,825 square miles, while New York is 54,556 miles.

Two islands, St. Martin and Anguilla, were almost fully inside Irma’s eye, as it passed over them on Wednesday morning, Parkinson noted in a tweet.

“Yep…that’s St. Martin and Anguilla both fitting almost entirely within the eye of #Irma” he said on a Sept. 6 tweet.

“Hurricane looks like largest ever recorded in the Atlantic!” Trump said.

Trump issued an emergency declaration for Florida on Sept. 5. The declaration “will help alleviate the hardship and suffering that the emergency may inflict on the local population” according to a White House statement.

The declaration applies to all 67 counties in the state and was issued “to lessen or avert the threat of a catastrophe.”

Florida Governor Rick Scott announced he would be activating members of the Florida Guard starting Wednesday.

“By the end of today, we will have 1,000 @FLGuard members activated. 6,000 additional members will report for duty Friday morning” he tweeted.