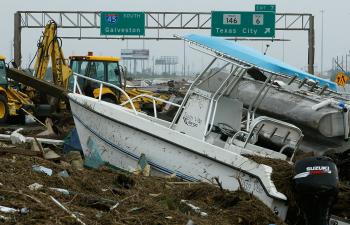 IKE AFTERMATH: Heavy equipment starts to move boats and other debris off of Rt.45 left by Hurricane Ike September 13, 2008 in Galveston, Texas. Hurricane Ike made landfall in the middle of the night causing wide spread damage to the Texas coast. (Mark Wilson/Getty Images )
US

According to AP, as of Sunday night, the number of deaths caused by Hurricane Ike reached eight: five in Texas, two in Louisiana, and one in Arkansas. About 2 million people heeded orders to evacuate, but when Ike made landfall on the Gulf Coast on Saturday morning as a Category 2 hurricane, an estimated 140,000 in Texas had still stayed behind to ride out the storm. While not all those who chose not to evacuate were put in harm’s way, federal officials reported that 2,000 people were rescued—almost 400 by air—in 2,500 search and rescue missions.

As Ike cruises toward the Northeast at 30 MPH as a tropical storm, it leaves behind flooded Louisiana coastlands, cities and economies on hold, and residents without electricity, energy, or water wondering what they next step should be.

President Bush declared a large portion of the Texas and Louisiana coasts hit by Ike as disaster areas, and plans to visit the area Tuesday. The federal government, he said, will be sending 1.5 million liters of clean water and 1 million meals a day to those affected by Ike. FEMA has dedicated hundreds of generators and thousands of blankets, cots, and tarps for the displaced.

Early reports are comparing the destruction to the havoc wrought by Hurricane Katrina in 2005. In Galveston, Tex., streets are lined with personal belongings flooded out of homes. In Houston, the 75-story tall JPMorgan Chase Tower has its windows blasted out and the Houston Texans football venue Reliant Stadium suffered “extensive damage.”

Several Louisiana towns and villages are still underwater as a result of the 5 to 10 inches of rain Ike dumped on the area also flooded by Katrina. The National Weather Service, before Ike hit, warned that anyone living in one- or two-story homes along the coastline would face “certain death” if they did not evacuate their homes.

“We expect FEMA to deliver these supplies, and we will hold them accountable,” said Houston Mayor Bill White to reporters after learning of the delay.

More than 2.8 million people in the tri-state area of Texas, Louisiana, and Arkansas are without electricity. 2.5 million in Texas—almost a quarter of all Texans—are without power, as are almost 200,000 in Louisiana and about 150,000 in Arkansas, according to the Department of Energy.

Search and rescue teams deployed to the disaster area were greeted with overwhelming devastation. California Air National Guardsmen from the 129th Rescue Wing were sent to Galveston to search for stranded victims. Major Rhys Hunt, a crew member, remarked, “When we got to Galveston, … there were four or five houses on fire, Galveston Airport was completely underwater, most of the city was flooded, and several piers were demolished."

“It looked like a war zone,” said Major Hunt.

Early reports from experts say that Hurricane Ike has caused between $6 billion and $18 billion of damage.

Energy production has shut down; about a dozen offshore oil platforms have been destroyed and natural gas pipelines have been closed.

Fifteen refineries in Texas and Louisiana were shut down, the Department of Energy said. Combined, they produce an estimated 3.9 million barrels per day. The DOE also announced that it would be releasing almost a million barrels of crude oil from its reserves to minimize the damage caused by the closures.

Across the country, gas prices skyrocketed, hitting $5.00 a gallon in some areas.

Flights into Houston were cancelled Sunday and only limited routes will run on Monday. As of Sunday night, port officials have not made up their mind of whether or not to open for shipping.