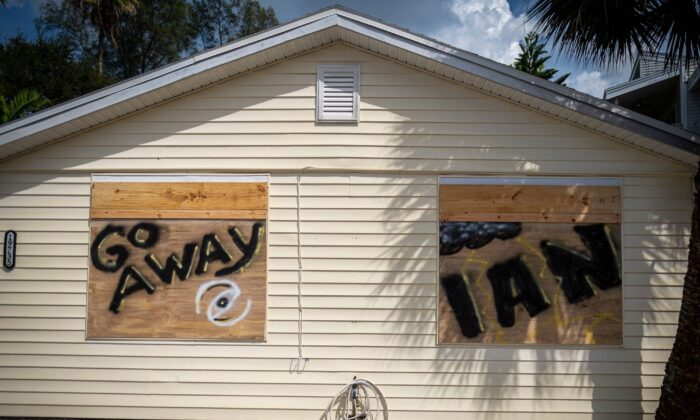 A house with "Go Away Ian" painted on the boarded up windows is seen ahead of the arrival of Hurricane Ian in Indian Shores, 25 miles west of Tampa, Fla., on Sept. 26, 2022. (Ricardo Arduengo/AFP via Getty Images)
Florida

As Hurricane Ian strengthened into a Category 2 over the Caribbean, authorities in Florida on Monday ordered the evacuation of around 300,000 people at risk of potentially deadly storm surges in the Tampa Bay region.

Ian is currently expected to make landfall over the Florida Panhandle on the state’s west coast on Thursday. Its intensity and trajectory are uncertain, but there are predictions it could become a Category 4.

“Basically, that’s everybody who lives along the water,” she said in a video message. “So if you have a place to go right now, just do it early so you don’t have to worry about anything else,” she added.

Hillsborough County released a zoned map (pdf) that shows which neighborhoods are expected to be most impacted by high winds, up to 156 miles per hour, and storm surges, reaching 38 feet.

The National Hurricane Center (NHC) said in an advisory at 5 p.m. Monday EDT that Fort Myres and the Tampa Bay region were most at-risk of life-threatening storm surges expected along much of Florida’s west coast.

“Residents in these areas should listen to advice given by local officials,” the NHC said.

Storm surges, which are domes of water pushed ashore by powerful winds, are the “greatest killer” of people during hurricanes, according to the Florida Division of Emergency Management. Storm surges have been known to move entire buildings and cause more damage than winds.

Tuesday will see heavy rainfall increase across the Florida Keys and south Florida, spreading to central and northern Florida on Wednesday and Thursday.

This may cause flash, urban, and small stream flooding, along with significant prolonged river flooding across central Florida, the NHC warned.

A video on social media claims to show the impact of the weather system putting pressure on Miami’s storm drains.

Florida Gov. Ron DeSantis declared a state of emergency in 24 counties last Friday in preparation for Ian, then referred to as Tropical Depression 9.

He warned the storm had the potential to strengthen into a “major hurricane” and urged Floridians to prepare accordingly.

Hillsborough County operates three kinds of shelters intended to provide immediate, life-saving protection for those in the path of a catastrophic and deadly storm.

The county warns residents never to go to a shelter unless a local official has declared it’s open. The county has shelters for the general population, that are pet-friendly, and for special needs, which are listed on its website. People who require medical equipment are eligible for special needs shelters.

Residents are advised to plan ahead and bring their own food, water, and bedding, as the shelters “are not resorts.”

Shelters generally don’t have cots, blankets, or food. People are advised to bring at least one gallon of water per person, per day, as well as non-perishable, easy-to-prepare food—including baby formula.

It is also advised to bring your own medication, medical items, and supplies, such as extra batteries. Alcohol, drugs, and weapons are not permitted at shelters.

At pet-friendly shelters, cats and dogs must be vaccinated for rabies and be licensed and kept on a leash or in a cage.

The NHC said in an update at 8 p.m. Monday EDT that conditions in western Cuba on Monday night were beginning to deteriorate, with significant wind and storm surge impact expected.

Earlier, at 5 p.m., the agency said in an advisory that life-threatening storm surges, powerful winds, flash floods, and possible mudslides are expected in portions of western Cuba starting Monday night and continuing into Tuesday.

“Devastating wind damage is possible where the core of Ian moves across western Cuba. Efforts to protect life and property should be rushed to completion,” the NHC said.