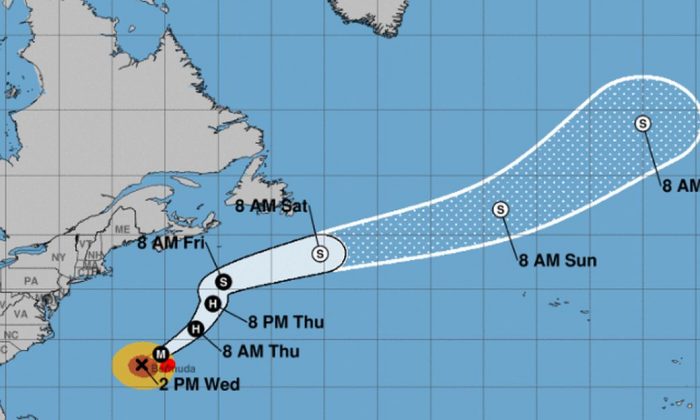 Hurricane Humberto is now a Category 3 storm with 120 mph winds as it approaches the island of Bermuda in the Atlantic Ocean. (NHC)
US News

Hurricane Humberto is now a Category 3 storm with 120 mph winds as it approaches the island of Bermuda in the Atlantic Ocean.

The hurricane, according to the U.S. National Hurricane Center (NHC), is 140 miles west of Bermuda and is traveling to the east-northeast at 16 mph.

A hurricane warning is in effect for the entire island of Bermuda, the agency said in its 2 p.m. update on Wednesday, Sept. 18.

“This general motion with an additional increase in forward speed is expected through early Thursday, followed by a northeastward to north-northeastward motion through Friday. On the forecast track, the core of Humberto is expected to pass just to the northwest and north of Bermuda later tonight,” the agency forecasted.

Humberto will fluctuate in strength but will remain a strong system as it nears Bermuda.  After that, a steady trend of weakening will begin starting on Thursday.

Hurricane conditions are expected in Bermuda by Wednesday evening.

“Humberto may bring periods of heavy rain to Bermuda through Thursday, with rainfall accumulations of 2 to 4 inches with maximum amounts of 6 inches expected,” the agency wrote.

Tropical Storm Jerry, which is far east of the Leeward Islands, might strengthen into a hurricane by the week’s end, the agency said.

“A west-northwest motion at a slightly faster forward speed is expected over the next few days. On the forecast track, the system will be near the northern Leeward Islands Friday and pass north of Puerto Rico on Saturday,” the hurricane center said.

Jerry is slated to turn into a hurricane by late Thursday, according to an 11 a.m. update.

Also, “A tropical wave located several hundred miles west of the Cabo Verde Islands is producing disorganized cloudiness and showers. Some development of this system is possible while the system approaches the Windward Islands this weekend or when it moves across the southeastern Caribbean Sea early next week,” the agency said. It added that the formation of a tropical cyclone is low.

The agency also said that a “large area of disorganized showers and thunderstorms near and to the south-southeast of the Dominican Republic is associated with a tropical wave.”

“While upper-level winds are not forecast to be conducive for significant development, locally heavy rainfall is possible over portions of the Dominican Republic and Haiti during the next couple of days. The disturbance is forecast to move slowly northwestward through the weekend,” forecasters said, adding that the formation of a cyclone is also low.