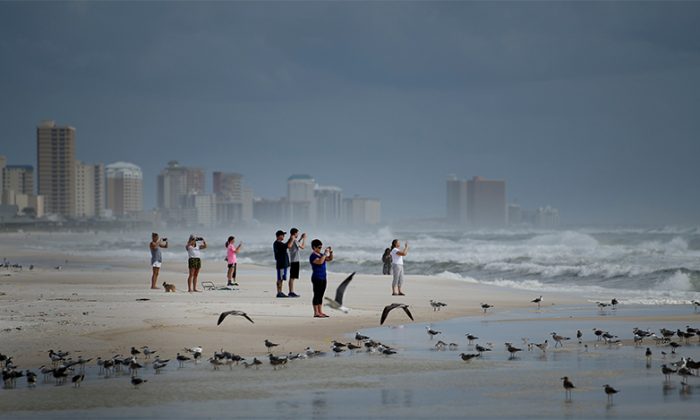 People look out to the Gulf of Mexico in Panama City Beach, Florida as Hurricane Michael approaches Oct. 9, 2018 (Brendan Smialowski/AFP/Getty Images)
US News

Hurricane Hitting Florida to Cloud US Economic Data for Months

With Hurricane Michael poised to be the strongest storm to hit the continental U.S. in 14 years, economy watchers are bracing for the data volatility that’ll soon follow.

While surging tides and fierce winds endanger lives and property along the Florida panhandle, any effect on the national economy will probably be temporary, based on past experience. The storm may further muddle economic figures for months, especially on the heels of Hurricane Florence in September, making it harder to get clean signals on employment, industrial production, and consumer spending.

One of the first indicators to show the fallout will be weekly initial jobless claims. In a sign there may just be a blip, swings due to Florence already are fading. Applications for unemployment benefits fell in the week ended Sept. 29 following a storm-related surge in the prior week, and claims are once again near the lowest level in almost five decades.

October figures on jobs, wages and hours worked may also be skewed because Michael’s expected landfall coincides with the Labor Department’s reference period for the surveys on monthly payrolls and the national unemployment rate.

Florence’s impact offers a handy template because that storm, which affected parts of the East Coast, came ashore during the reference period for the September jobs report. Those figures showed national payrolls at restaurants and bars—an industry where most workers only get paid if they show up to work—fell by 18,200, and about 299,000 people weren’t at work due to bad weather last month.

Depending on Michael’s actual intensity and path, consumer purchases and factory production data could also show more volatility as people flee the area, businesses and oil production facilities shut temporarily, and workers at utility and construction companies work overtime preparing for damage and the rebuilding that follows. Retail sales of food, water, and cleanup supplies tend to rise, though purchases of more discretionary items, such as restaurant visits and shopping for apparel and home decor, often get curtailed.

Last year, hurricanes including Harvey and Irma led to volatility in economic data for several months. Automobile sales took a hit in August 2017, then rebounded to a 12-year high the following month as Americans replaced damaged vehicles. Industrial production dipped in August and September 2017 before surging in October as output at oil refineries and petrochemical plants returned to normal operations following Harvey-related flooding in the Houston area.

In a nod to the hurricane-season impact, the Federal Reserve said in September 2017 that the disruptions were unlikely to materially alter the course of the national economy over the medium term. Last month, following Florence, central bankers indicated they will push ahead with a fourth 2018 interest-rate hike in December and raise borrowing costs several times in 2019.

The Bloomberg Economics team “does not anticipate a sustained impact from Hurricane Michael at the national level, yet a wide swath of economic indicators will be distorted over the next few months,” said senior economist Yelena Shulyatyeva in New York.

“Lower headline payrolls and hours worked and artificially boosted average hourly earnings in addition to elevated work absences and hour curtailments will be among the data distorted by the upcoming storm,” Shulyatyeva said.