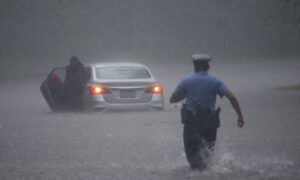 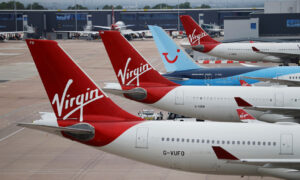 Virgin Atlantic Airways Seeks Bankruptcy Protection in US
0
US News

Hurricane Florence has prompted a mandatory evacuation order for anyone living within one mile of two rivers, the Cape Fear River and the Little River, in the Fayetteville, North Carolina area on Sept. 15.

Florence, which remained a hurricane for around half a day after making landfall on Sept. 14, but is now a tropical storm, has deluged the Carolinas with rainfall, storm surges, and high winds.

Officials announcing the mandatory evacuations in a press conference in the early afternoon aimed at people who would ignore them, telling them the threat was serious.

Officials said the storm can still be devastating despite being downgraded to a tropical storm, noting how some areas of the state have received around two feet of water.

‘This is For Real’

Officials said people across Cumberland County are in danger of losing their lives.

Cape Fear could crest around 62 feet, officials said, which would be higher than the 58 feet seen during Hurricane Matthew.

New Evacuation Orders are in place. Go to https://t.co/Yx3twhyOqj to see if you are in an area with a mandatory or volunteer evacuation. If you decide to leave your home, be sure to check https://t.co/0PMxxOuueW before you leave to ensure your route is clear. #FlorenceNC pic.twitter.com/XzXPUP2gWs

Whoa. The Cape Fear River at Fayetteville is expected to climb to 62.4 feet. Flood stage is 35 feet… Flooding remains a HUGE threat in the days ahead-especially to our communites along rivers. #wral pic.twitter.com/kfQCwP10qJ

Everyone in the mandatory evacuation zone, an estimated 2,800 households, according to WCNC, was ordered to leave by 3 p.m. EST. Flooding was expected to start on Saturday night.

Those who ignore the order could be on their own, officials said, reported the Charlotte Observer; rescue crews may not be sent into flooded areas that were under the order.

Cumberland County’s shelters were around half full, with a total capacity of around 1,225 people.

The Marines, the Coast Guard, civilian crews, and volunteers used helicopters, boats, and heavy-duty vehicles on Sept. 15, to rescue scores of people trapped by Florence’s shoreline onslaught, even as North Carolina braced for what could be the next stage of the disaster: widespread, catastrophic flooding inland.

The death toll from the hurricane-turned-tropical storm climbed to eight.

A day after blowing ashore with 90 mph winds, Florence practically parked itself over land all day long and poured on the rain. With rivers rising toward record levels, thousands of people were ordered evacuated for fear the next few days could bring the most destructive round of flooding in North Carolina history.

More than two feet of rain had fallen in places, and the drenching went on and on, with forecasters saying there could be an additional 1½ feet by the end of the weekend.

“I cannot overstate it: Floodwaters are rising, and if you aren’t watching for them you are risking your life,” Gov. Roy Cooper said.

As of 5 p.m. EDT, Florence was centered about 60 miles west of Myrtle Beach, South Carolina, inching west at 2 miles per hour—not even as fast as a person walking.

In its initial onslaught along the coast, Florence buckled buildings, deluged entire communities and knocked out power to more than 900,000 homes and businesses. But the storm was shaping up as a two-part disaster, with the second, delayed stage triggered by rainwater working its way into rivers and streams.

The flash flooding could devastate communities and endanger dams, roads, and bridges.