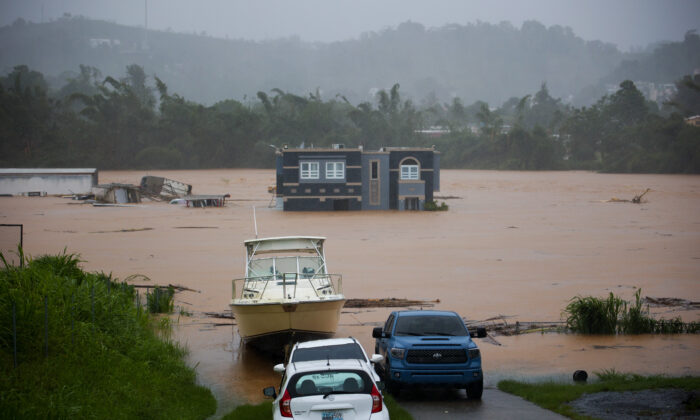 A home is submerged in floodwaters caused by Hurricane Fiona in Cayey, Puerto Rico, on Sept. 18, 2022. (Stephanie Rojas/AP Photo)
US News

Hurricane Fiona Will Intensify as Forecasters Reveal Where Its Going Next

Hurricane Fiona has weakened after hitting Puerto Rico but is forecast to strengthen again later on Sept. 19, according to the National Hurricane Center (NHC).

Then, Fiona will likely move to the north before heading north-northeast and may strike the Turks and Caicos islands on Sept. 20 before it passes near Bermuda, located far out in the Atlantic, later this week. The storm, or remnants of it, is forecast to hit northeastern Canada by Sept. 24.

“Fiona is moving toward the northwest near 8 [miles per hour]. … This general motion is expected to continue through tonight, followed by a turn toward the north-northwest on Tuesday and to the north on Wednesday,” the NHC stated on Sept. 19. “On the forecast track, the center of Fiona will move over the southwestern Atlantic this afternoon.”

When it moves out into the Atlantic, “strengthening is expected during the next few days after the hurricane emerges over the southwestern Atlantic, and Fiona is forecast to become a major hurricane by Wednesday,” according to the NHC.

Early on Sept. 19, Fiona made landfall in the eastern portion of the Dominican Republic hours after it struck Puerto Rico, leaving much of the U.S. territory without power.

The storm, hitting Puerto Rico five years after Hurricane Maria devastated the island, ripped up asphalt from roads, swept away a major road bridge, closed airports, swamped cars, and dumped rain in such quantities that some rivers were rising by 20 feet in just hours, according to eyewitnesses.

“This has been catastrophic,” Puerto Rican Gov. Pedro Pierluisi said at a press conference in the capital, San Juan.

Power had begun to be restored to some areas by the evening of Sept. 18, officials said, but reconnecting the whole island would take days.

It comes as researchers say the 2022 Atlantic hurricane season has been exceptionally quiet so far. One meteorologist noted that from early July and the entirety of August, there were no named storms—a first since 1941.