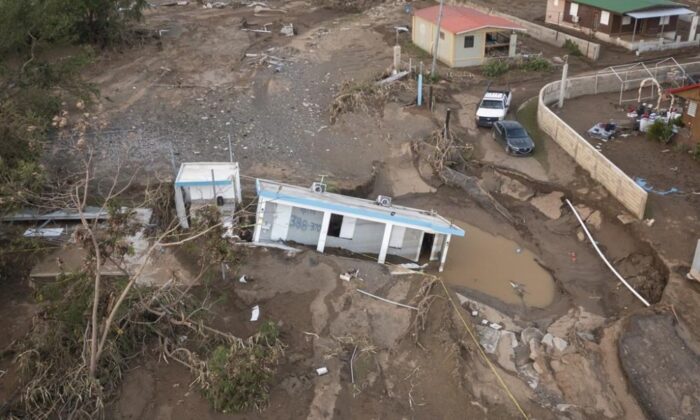 A view of a house that was washed away by Hurricane Fiona at Villa Esperanza in Salinas, Puerto Rico, is shown on Sept 21, 2022. (The Canadian Press/Alejandro Granadillo)
Canada

Forecasters say hurricane Fiona is shaping up to be a “historic” storm when it blasts through Atlantic Canada and eastern Quebec this weekend, packing winds likely to top those of post-tropical storm Dorian in 2019.

Bob Robichaud, a meteorologist with Environment Canada, told a news conference that as of Thursday afternoon, modelling projected “all-time” low pressure across the region, which will bring storm surges and rainfall of between 100 and 200 millimetres.

“It’s going to be a storm that everyone remembers once it’s all said and done,” said Robichaud. “One of the words I’m using is historic.”

Robichaud said it remains to be seen if the wind gusts will set records, but he added that the expectation was that gusts would be stronger in some areas than the 150 km/h winds felt during Dorian when it made landfall.

Dave Pickles, chief operating officer of Nova Scotia Power, said it’s expected there will be widespread power outages and the utility was positioning about 800 people in locations around the province.

“Trees are in full bloom. They will come down and it will cause power outages,” he predicted.

John Lohr, the minister responsible for Nova Scotia’s Emergency Management Office, said on Thursday there was no longer any doubt a severe storm would sweep through the region.

“Fiona is different …. It has the potential to be very dangerous. Every Nova Scotian should be bracing for impact,” he said.

Heading northward, Fiona was expected to reach Nova Scotia waters by Friday night before passing through the eastern mainland part of the province, Cape Breton and Prince Edward Island on Saturday, and on to Quebec’s Lower North Shore and southeastern Labrador early Sunday.

Ian Hubbard, a meteorologist at the Canadian Hurricane Centre in Dartmouth, N.S., said the forecast was for the worst gusts to hit eastern Nova Scotia, Cape Breton and parts of Prince Edward Island.

The conditions are expected to bring pounding surf to coastal areas of Nova Scotia and Newfoundland, with waves off Nova Scotia expected to build to more than 10 metres, while wave heights could be more than 12 metres in eastern parts of the Gulf of St. Lawrence. There is also the potential for flooding in coastal and mainland areas.

Hubbard said if anything, the storm’s track had shifted slightly to the west and inland since the beginning of the week.

Amanda McDougall, the mayor of Cape Breton Regional Municipality, said officials were preparing a shelter for people to enter before the storm begins.

“We have been through these types of events before, but my fear is, not to this extent,” she said. “The impacts are going to be large, real and immediate.”

McDougall said her emergency planners are concerned that some kinds of housing, particularly older homes and RVs, “will not be able to withstand the winds and the flooding the way other buildings may.”

In Charlottetown, the director of P.E.I.’s Emergency Measures Organization told a briefing that the province is preparing for the worst. “Storm surge is certainly going to be significant,” Tanya Mullally said. “The words that they were using with the Canadian Hurricane Centre is ‘historic storm surge’—so, flooding that we have not seen and nor can we measure against.”

Meanwhile, Tim Marsh, president of the Nova Scotia Federation of Agriculture, said the storm comes as a potential “worst-case scenario” for many farmers who are in the middle of their harvest season.

Marsh was reached inside the cab of his tractor Thursday, as he rushed to bring in his corn crop at his farm outside Windsor, N.S., in the province’s agriculturally rich Annapolis Valley.

He said apple farmers and grape growers in particular, could be hard hit by high winds.

“The apple guys especially—they’ve only really been picking for the last couple of weeks, and there will be an awful lot of apples still on trees that will be susceptible,” Marsh said.

He said crops planted in low-lying areas could be at risk because of the rainfall amounts forecasted.

“It could waterlog them or make them almost impossible to harvest,” Marsh said. “Hopefully it won’t be too much of a disruption to the food system.”

Fiona caused historic flooding when it barrelled through Puerto Rico earlier this week, smashing roads and bridges. It then struck the Dominican Republic and swiped past the Turks and Caicos Islands as it strengthened into a Category 4 storm.

The forecast calls for the storm to pass near Bermuda early Friday.

By Keith Doucette and Michael Tutton