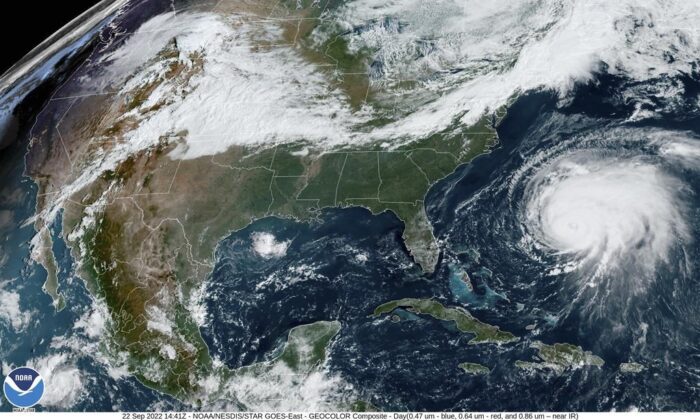 This satellite image provided by NOAA shows Hurricane Fiona in the Atlantic Ocean near Bermuda, moving north on Sept. 22, 2022. (NOAA via AP)
Canada

People across Atlantic Canada were stocking up on last−minute essentials and storm−proofing their properties Friday ahead of the arrival of Fiona, which forecasters say will hit the region as a “very powerful” post−tropical storm.

Dave Buis, vice−commodore of the Northern Yacht Club in North Sydney, N.S., said he is worried about the storm, which is expected to slam the island of Cape Breton.

“Oh definitely, I think this is going to be a bad one,” Buis said in a telephone interview. “Hopefully it will slow up when it hits the cooler water, but it doesn’t sound like it’s going to.”

He said he removed his seven−metre sailboat from the water on Thursday and moved it to a storage area behind the yacht club. Another five boat owners did the same, while others at the club lashed down their boats with extra lines.

“We moved a bunch of piers away from the southeasterly (wind) directions and put them on the other side so they’d be safe,” Buis said. “Everything that was in front of the yacht club needed to be moved.”

In addition to significant storm surge, potential for flooding in coastal and mainland areas and an “all−time’’ low pressure across the region, the storm is expected to cause widespread power outages due to trees and electrical poles brought down by powerful winds.

On Thursday, Environment Canada meteorologist Bob Robichaud said it remains to be seen if Fiona’s wind gusts will set records, but the expectation is that gusts will be stronger in some areas than the 150 km/h winds felt when post−tropical storm Dorian made landfall in 2019.

Nova Scotia Power has said that about 800 utility workers have been positioned in locations around the province in anticipation of outages and damage to power poles.

Amanda McDougall, the mayor of Cape Breton Regional Municipality, said Thursday that officials were preparing a shelter in the Sydney, N.S., area for people to enter before the storm begins. She said emergency planners are concerned that some kinds of older housing won’t be able to withstand the force of the winds.

The Construction Association of Nova Scotia also urged its members to shore up construction sites and building cranes ahead of the storm, warning that buildings under construction would be particularly vulnerable.

“With knowledge that construction and tower crane sites in the province come with some additional risk during these events, we urge you to be diligent to meet all safety precautions,” the association said on its website.

During Dorian, powerful winds toppled a 73−metre high construction crane in downtown Halifax. No one was injured but the crane caused damage to a 13−storey building that was under construction.

In Quebec Friday, Premier François Legault said authorities were keeping a close eye on Fiona, which is on track to hit the Îles−de−la−Madeleine, Gaspé and the province’s Lower North Shore.

“I want to tell people in those regions, be careful, there’s a significant risk, prepare for the worst and we’ll hope it goes well,” Legault said in Laval.

Fiona pounded Bermuda with heavy rains and winds early Friday as it swept by the island as a Category 3 hurricane.