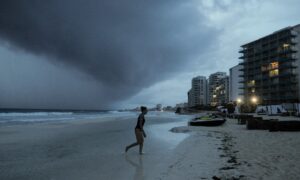 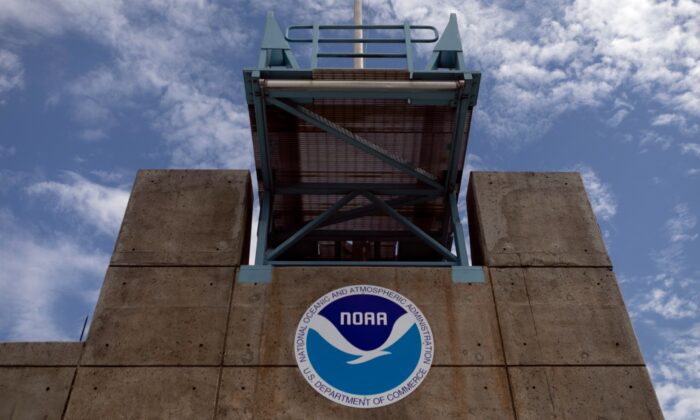 The logo of the National Oceanic and Atmospheric Administration (NOAA) is seen at the National Hurricane Center in Miami, Fla., on Aug. 29, 2019. (Eva Marie Uzcategui/Getty Images)
Americas

Eta had maximum sustained winds of 90 mph (150 kph) and was located about 140 miles (225 kilometers) east of the Nicaragua-Honduras border, according to the National Hurricane Center. It was moving west at 10 mph (17 kph).

It said the storm could strengthen further and become a major hurricane before running ashore by early Tuesday, likely in Nicaragua, where it could bring rains measured in feet rather than inches.

Forecasters said central and northern Nicaragua into much of Honduras could get 15 to 25 inches (380 to 640 millimeters) of rain, with 35 inches (890 millimeters) in isolated areas. Heavy rains also were likely in eastern Guatemala, southern Belize, and Jamaica.

Storm surge up to 15 feet (4.5 meters) above normal tides was possible for the coast of Nicaragua. The hurricane center also warned of life-threatening flash flooding and landslides in areas with higher terrain.

Nicaragua’s navy evacuated the Miskito Cays of about 1,650 residents along the coast on Sunday and prohibited launching any boats along the stretch of coastline expected to receive Eta. Offshore residents were taken to shelters in Bilwi, also known as Puerto Cabezas, the primary city of the Northern Caribbean Autonomous Region that is home to some 66,000 people, according to Guillermo González, director of Nicaragua’s national emergency management agency.

González said that 88 tons of rice, oil, corn, and other food basics had been to the area. The Rio Coco, which makes up part of the border with Honduras is home to many indigenous communities. It is known to overwhelm its banks in heavy tropical rains.

Nicaragua’s government has also placed northern provinces on alert as Eta is expected to move through the country’s northern mountains after coming ashore.

Eta’s expected path through Central America while dumping prodigious amounts of rain was already raising references to Hurricane Mitch, the 1998 storm that killed thousands in the region.

Eta is the 28th named Atlantic storm this season, tying the 2005 record for named storms. However, this is the first time the Greek letter Eta is being used as a storm name because after the 2005 season ended, meteorologists went back and determined there had been a storm that should have gotten a name but didn’t.

Hurricane season still has a month to go, ending Nov. 30. And in 2005, Zeta formed toward the end of December.