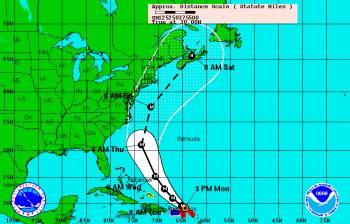 Hurricane Earl is forecast to run almost parallel to the US East Coast, starting with North Carolina. It may reach the Canadian Maritime provinces by Saturday morning. (NOAA)
US

The major Category 3 system will run almost parallel to the U.S. East Coast in the next several days, starting with North Carolina. Earl predicted to reach the Canadian Maritime provinces on Saturday morning.

The still-growing Earl is currently about 60 miles northeast of St. Thomas, one of the US Virgin Islands, and 120 miles east-northeast of San Juan, Puerto Rico. The storm has already torn roofs of buildings, and knocked down power lines and tress on the several the islands it passed by.

The Hurricane Center said that Earl may upgrade into a Category 4 hurricane with winds up to 145 miles per hour.

In the Atlantic hurricane season thus far, two major hurricanes have been named, including Hurricane Danielle and now Earl. The Center said that there will be a total of approximately four to six major hurricanes this season.