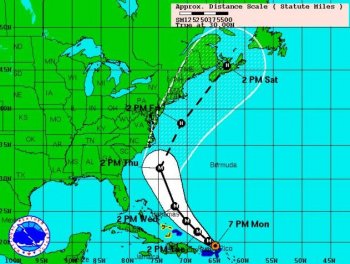 HURRICANE COMING: Hurricane Earl is forecast to run almost parallel to the U.S. East Coast, starting with North Carolina. It may reach the Canadian Maritime provinces by Saturday morning. This image shows a five-day forecast of the hurricane's path. (Courtesy of NOAA)
US

Earl, located about 95 miles northeast of San Juan, Puerto Rico, is moving at 15 mph toward the west-northwest with maximum sustained winds of 135 mph Monday evening.

On its forecast track, the Category 4 system will turn toward the northwest on Tuesday and run almost parallel to the U.S. East Coast in the next few days, starting at North Carolina. It is predicted to reach the Canadian Maritime provinces on Saturday morning.

The still-growing hurricane has already torn roofs of buildings and knocked down power lines and trees on some of the islands early Monday. It moved away from the Virgin Islands Monday night and is expected to pass east of the Turks and Caicos Islands on Tuesday night and Wednesday.

“Stronger winds, especially in gusts, are likely over elevated terrain in Puerto Rico,” the advisory read.

Earl is expected to produce total rainfall accumulations of 4 to 8 inches over the Northern Leeward Islands, the Virgin Islands, and Puerto Rico with a possible isolated maximum at 12 inches.

“These rains could cause life-threatening flash floods and mudslides,” according to the advisory.

A Category 4 system on the Saffir-Simpson Hurricane Wind Scale can lead to “catastrophic damage,” according to the center.