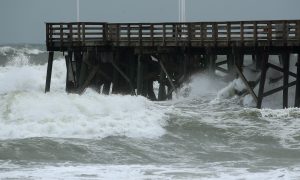 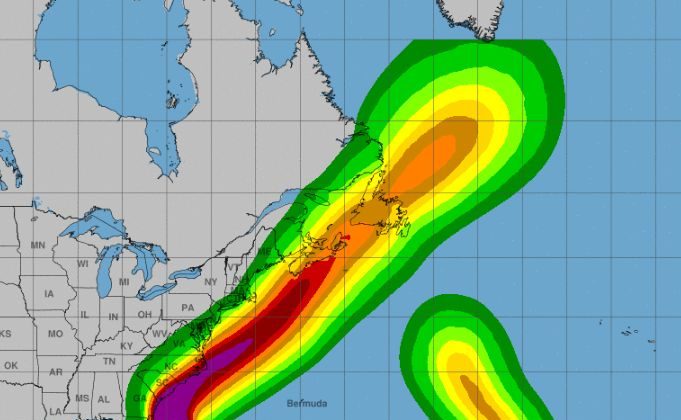 The storm is moving close to the southeastern U.S. coast. (NHC)
US News

Hurricane Dorian to Affect Millions Along Southeastern US Coast Until Friday

Hurricane Dorian is slated to track near the coasts of Florida, Georgia, South Carolina, North Carolina, southeastern Virginia from now until, Friday, Sept. 6.

The storm, a Category 2, will deliver storm-surge flooding, heavy winds, and drenching rain, according to the U.S. National Hurricane Center (NHC) in its latest update on Sept. 4.

As the Weather Channel reported, there is currently major flooding in St. Augustine, Florida.

Dorian, with 110 mph winds, has “strengthened a little” after U.S. Air Force “hurricane hunter” aircraft performed a reconnaissance flight into the storm, the NHC said.

The eye is now currently east of southeastern Georgia, it said.

The storm is now 150 miles south of Charleston, South Carolina, and 275 miles of Wilmington, North Carolina.

A hurricane warning is in effect for north of the Savannah River to the North Carolina-Virginia border as well as the Pamlico and Albemarle Sounds.

A summary of watches and warnings provided by the NHC:

-Storm surge warning: North of Port Canaveral, Florida, to the North Carolina-Virginia border; the Pamlico and Albemarle sounds; and the Neuse and Pamlico rivers

-Hurricane warning: North of the Savannah River to the North Carolina-Virginia border; the Pamlico and Albemarle sounds

-Tropical storm warning: The Volusia-Brevard county line in Florida to the Savannah River

An AccuWeather forecaster said that remnants of Hurricane Dorian will likely affect New York City “like a lower-end nor’easter” on Friday, Sept. 6.

“There is going to be some rain and wind, in a very simple, broken-down, capsulized version,” senior meteorologist David Dombek told the New York Post. “Then Dorian moves quickly. By Friday it’s no longer this crawling storm. By Friday it’s cranking along pretty good.”

Dorian’s most dangerous impact in the area will be rip tides it will create along New York beaches. Long Island will see gusts of up to 50 mph.

As the New York Daily News forecast noted, the storm will have “only a fraction of the power unleashed over the weekend” in the Bahamas.

The storm is forecast to pick up speed and will move swiftly to the northeast after it impacts the Carloinas and Georgia.